View source
watch 04:03
Wiki Targeted (Games)
Do you like this video?
Play Sound 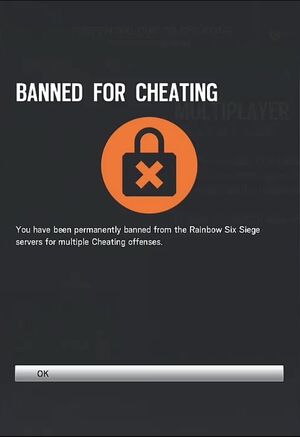 Sanctions, also known as Suspensions and Bans, are a gameplay mechanic of Tom Clancy's Rainbow Six Siege. They are penalties enacted by breaking the game's Terms of Use or Code of Conduct and result in a temporary or permanent ban from matchmaking, restrictions from certain playlists, or a buffer on Renown gain.

Not to be confused with the Rainbow Six Wiki:Code of Conduct.

The following actions are forbidden, and can lead to a disciplinary action in accordance with the Disciplinary Policy outlined below.

In the event of a Code of Conduct violation, disciplinary action will be taken. Depending on the seriousness of the violation, sanctions can range from a warning to a permanent ban.

A suspension is the first step of disciplinary action taken towards offending players. Each offense will result in a successively longer ban from matchmaking. Should the player incur an Abandon Penalty from prematurely leaving a Ranked or Unranked match, they will be suspended from matching making in Ranked and Unranked matches and will incur a -50% renown gain for all Renown awarded during the suspension period. The suspension period cooldown is a full 7 days until all sanctions wear off.

Players that are kicked from two consecutive matches as a result of Reverse Friendly Fire from Team Killing are also subject to the same suspension penalty as an abandon penalty. Offenses and suspension times are automatically deactivated after a period of time.

Below are other examples of behavior that could lead to being banned from playing online or restricting access in other ways from the Game: 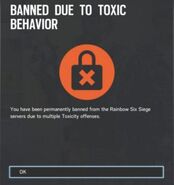