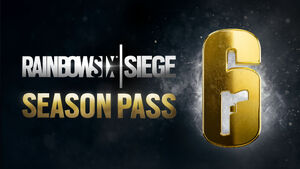 The Season Pass is a feature of Tom Clancy's Rainbow Six Siege that can be purchased for $29.99 USD. It rewards players with bonuses and cosmetic items not available to non-owners of the pass. To date, there have been five season passes available for purchase. Once a season has ended, players will retain access to all content included in the pass except for boosts.

Retrieved from "https://rainbowsix.fandom.com/wiki/Season_Pass?oldid=78692"
Community content is available under CC-BY-SA unless otherwise noted.