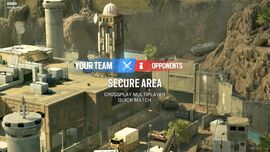 As with other gamemodes, two teams are pitted against one another in a 5v5 format with a four minute time limit. Attackers are tasked with locating the room housing the biohazard container and holding the position for 10 consecutive seconds. Defenders must stop this from happening by maintaining a presence within the room. All Defenders will be notified when the Attackers start securing the area. The timer will stop and become contested should a Defender enter the room. If the round timer ends and the objective is still contested, the round will go into overtime. Overtime continues until either side is no longer in the objective room.

The match will end if the Attackers secure the area, the round timer expires, or all players on a team have been eliminated.