The Shooting Range is a feature of Tom Clancy's Rainbow Six Siege that is set to be introduced in the Operation Vector Glare expansion. It was announced on February 20th, 2022 at the Six Invitational 2022. Available in the Learning Area playlist, the Shooting Range allows players to practice with weapons.

The Shooting Range allows players to test out and compare the different weapons used by Operators. All Operators and their weapons are available, even if they are not unlocked. The Shooting Range has two firing lanes: Recoil and Damage.

The Recoil lane features circular targets and targets with dummy silhouettes. It measures the spread created from the kickback when a weapon is fired. Aside from default configurations, it is useful for testing how weapon spread is affected by attachments or how it may have changed following the release of a patch.

The Damage lane features dummy targets that display the amount of damage dealt by each bullet when it hits a specific part of the body. Dummies stances are available in standing, crouching, and prone positions.

A large monitor is displayed on the lefthand side of each lane. This displays the target range, type, and an enlarged view of the target to make them easily identifiable. Players can switch between 5, 10, 20, and 30 meter ranges for targets by firing at the corresponding checkbox on the monitor. Targets can also be switched in the same manner. 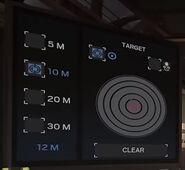 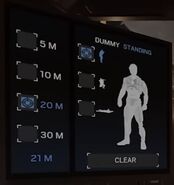