watch 01:46
'Rainbow Six' Profile: Sledge
Do you like this video?
Play Sound

Born in the far north of Scotland, Cowden's military father and nurse mother moved to Inverness with him and his three siblings when he was five. His athleticism elevated him to the position of Captain of the 1998 Scotland National under-20 Rugby Union Team. Following a long family tradition of military service, Cowden joined the 3rd UK Mechanised Division of the British Army at age 18. His drive and physique suit the divisions's historical nickname of "Iron Sides." Cowden's first assignment was in the Armoured Division where he studied engineering and specialized in upgrading the infantry combat vehicles. From there, he developed various breaching tactics. After five years of active duty, he was recruited into the SAS, where he holds multiple records in speed and strength. An expert in mechanical, ballistic, explosive and thermal breaching strategies, Cowden is the operator to choose for quick and relatively silent destruction.[1]

It's part of my job to understand where the country shapes the person and Specialist Seamus "Sledge" Cowden seems indelibly shaped by the rugged terrain where he was born. It isn't just his imposing presence and athleticism. I can't help but feel that his personality evokes the wilderness as well. He's stoic and proud, though he admits that he can be hot-headed at times. Field reports describe his courage, leadership, and extensive operational experience as much as they mention his unpredictability. He's much more than a "gentle giant as some suggest. […]

Cowden is something of a raconteur, and for much of our discussion, he told me one rowdy tale after another. When he was twelve he cobbled a hang glider together out of boat sails and launched himself off his house. He broke both ankles. During military training, he accidently collapsed his entire sleeping barrack while testing a new breaching technique, and another time he sank a captain's motorcycle by riding it off the pier because he wanted to see how far it would travel on the surface - not far, I gather. His stories aren't just to entertain. They help to establish a comfortable connection. It's such a casual, offhand leadership style. […]

Cowden views his fellow operators as family, Specialist Mike "Thatcher" Baker in particular, who he credits for convincing him to switch to the Caber. Numerous Rainbow operators refer to Sledge as one of the easiest operators to work with. […]

Overall, Cowden is easy-going and unpretentious, though he get ruffled at the mention of politics. A self-proclaimed news junkie, he doesn't shy away from debates. In fact, it's the reason he joined the military, and why one of his brother is currently an elected MP. Cowden understands that while on assignment Rainbow operators don't voice their political opinions and so far there hasn't been any issues. We should trust that he can control his hot-headedness. At least before he's down at the pub.

A Medium Armored Operator, Sledge wields a specialized Tactical Breaching Hammer, known as "The Caber", which can breach through almost all non-reinforced surfaces and barricades with relative silence. Because of this, Sledge is able to bust through walls, floors, and barricades with a silent yet aggressive pace.

While breaching hammers are nothing new to CTU or law enforcement operations, “The Caber” is unique due to its exceptional size and weight. Such dimensions would be impractical in the hands of most agents but Sledge’s exceptional physical prowess make it a formidable presence on the battlefield, allowing for quick and effective breaches.

Sledge’s breaching hammer was directly inspired by CTU battering rams. There are four kinds of breaching tools: mechanical, ballistic, explosive and thermal. Using sledgehammers or other blunt objects to breach is known as mechanical breaching, and often serves as a relatively quiet supplement compared to the other, more attention-grabbing methods. Mechanical breaching was used during the Iranian Embassy Siege to gain access to rooms and is still used in modern-day conflicts in tight urban zones where ballistic or explosive breaching methods carry more risk.

I'm told you wanted to have a looksee at my Brucie. Why? No offense, Mira, but I don't need someone mucking about with my Caber, trying to make it look sexier. When Mike's uncle built it for me (sorry... Specialist bloody Mike "Thatcher" bloody Baker), he damn well made me forge the thing over and over again until we got it right. It's a solid piece, no forge weld to introduce weak points. It's made with a differential heat treatment to better transmit the shock of blows along the core and the shaft is covered in fiberglass molded to my handspan for better grip. It's a solid 4140 steal, built for shock and stress, balanced to prevent it from being too top heavy. I don't need laser sights put on the damn thing, and I can promise you that if any of your techies come near Brucie, as the saying goes, "it will kill."

Sledge concept art
Add a photo to this gallery

Sledge armed with an M590A1

Sledge armed with an L85A2 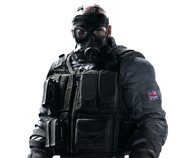 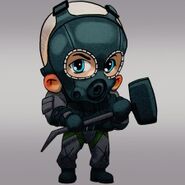 Sledge in the 8-Legged Bundle 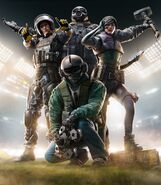 Sledge, Mira, Dokkaebi and Jäger in a box art

Sledge as he appears in The Mighty Quest For Epic Loot.
Add a photo to this gallery 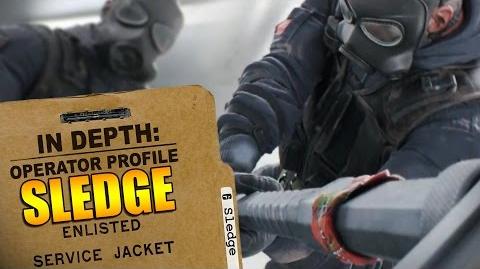 Retrieved from "https://rainbowsix.fandom.com/wiki/Sledge?oldid=85865"
Community content is available under CC-BY-SA unless otherwise noted.