Edit
watch 02:34
Fire Emblem Warriors: Three Hopes - The Loop
Do you like this video?
Play Sound
This article features a Codex entry.

Smashers are large and durable organisms that were created by the Chimera Parasite in response to the increased payload of ordinances being used by the U.S. Government.

During the initial infestation stage of the Chimera Parasite, Smashers were produced by infecting and mutating humans. This caused infected individuals to grow a thick carapace armor around their bodies that makes them almost invulnerable to most forms of damage. Despite their size, Smashers are capable of short bursts of speed that can be devastating to objects or people in its path. The concentration of carapace on their bodies have left them blind and vulnerable to attack on their backsides. This weak spot has been observed as a red glowing gash on their back. 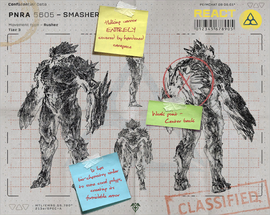 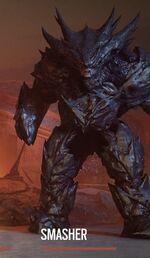 Smashers are enemies featured in the Outbreak event. These large imposing enemies are immune to damage on their frontside but the flesh on their backsides are exposed, leaving them vulnerable to damage. Although gunfire to the wound will damage the Smasher bit by bit, it is more effective to melee it through "backstab" takedowns. This can be done by provoking the blind Smashers with noise (such as gunshots or explosives) into a wall or obstacle, stunning and making them become vulnerable. This cannot be done with reinforced walls as Smashers will run through them with ease.

Up to three takedowns are necessary to kill the Smasher. Also, getting too close to a Smasher causes them to swing their arms, knocking back all nearby Operators and dealing moderate damage. 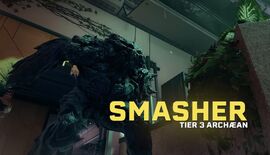 Smashers remain invulnerable on their front sides and their weak point is still located on their backs. Unlike in Outbreak, only one Takedown on the Smasher's back is needed to kill it. As such, a Smasher can be taken down relatively quickly by first stunning it and performing a takedown. Smashers will also sustain slight damage if players fire at their weak point or if they are hit with explosives such as Nitro Cells, Hibana's X-KAIROS, Smoke's gas grenades, and Fuze's cluster charges.

When alerted, they will head towards players and destroy obstacles in their way. Once they are close enough to a player, they will charge towards them, dealing massive amounts of damage. Should a Smasher run into an indestructible object, they will be momentarily stunned, allowing for a Takedown.

On higher difficulties, Elite Smashers will appear. They are stronger and faster than normal Smashers. Similar to the Smasher in Outbreak, Elite Smashers require three takedowns to the back in order to be killed.

This section features a Codex entry. 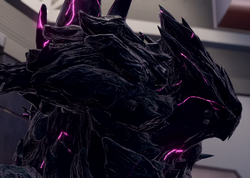 Eye In The Sky (Alaska) 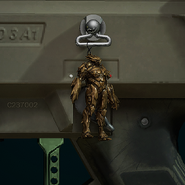