James Porter was born on May 14 at Kings Cross in London, England. Porter was not an exceptional student growing up though aptitude tests revealed his propensity for science. Encouraged by faculty and his parents, he was able to follow an unorthodox manner of education through tutors, home-schooling, and field science. Flourishing from his break from formal studies, he quickly developed his skills in chemistry, biology, and math. During his gap year, Porter was uninterested in pursuing a formal university education. He enlisted in the British Army and forged a fake ID in order to circumvent parental consent.

After basic training, he was stationed in Belfast, finding the posting to be a bit dull. In the wake of the March 2007 treaty, he joined the Army Boxing Team as a middleweight. Though the rigidity of army rules wasn't always a good fit, it was offset by the diverse range of training and experiences army life gave him. While he has been reprimanded for breaking rules, his superiors quickly recognized both his innovation and strategic perspective. He was then encouraged to join the SAS.[1]

Porter is a thrill seeker with very little regard for his personal safety. He is fearless in battle and can be a great asset for defensive maneuvers. However, he seems to enjoy the havoc and chaos of war. He tends to have an odd sense of humor in stressful situations. Can be narcissistic. Porter prefers to acquire knowledge and skills, such as language and music, in his own way and does not excel in a formal training capacity.

It's important for me to not have any preconceived expectations before a face-to-face with any specialist. Since assessments of Specialist James "Smoke" Porter contain some contradictions, I couldn't have settled into any viewpoint anyway. So essentially he entered my office as somewhat of a mystery. […]

Porter is consistently described as detached. I reviewed his files and found that his "aloofness" occurs during high-intensity situations. It's likely not detachment, but focus. I'm reminded of my uncle who used to tap his forehead and tell me to master my mind. Porter, I think, is master his mind to stay on task and filter out dangerous distractions. He strives to keep emotions away from decision-making, opting for outlets such as live music events to deplete the tension, thus enabling him to be the person he needs to be on the job. […]

It's clear that Porter's parents encouraged him to be a free spirit and develop his education and personality on his own terms. While it resulted in some unfortunate mishaps - one science experiment left some physical scars but no emotional ones that I can see - there was great benefit in it. […] Porter's free range education helped create a complex, dynamic person who isn't easily categorized.

Porter is popular among his teammates and considered valuable despite some recklessness. Descriptions such as thrill-seeker and fearless seem simplistic to me, however. There's more nuance to Porter than that. He's measured and understands calculated risks. Porter - and our other operators - understand that it's more important to respect fear than to try to pretend we never feel it. […]

Self-taught from an early age, Porter continues to spend time cultivating his own identity. He enjoys acquiring experiences and once he's mastered them, moves on. The exception is his adopted daughter. He would only share one photo of her. I've never seen an infant surrounded by so much dangerous paraphernalia, but Porter assures me she is now in high school, excelling within the system he himself was unable to comprehend. Through her, he sees the world in new ways - exactly the kind of challenge he adores.

A Medium Armored Operator, Smoke is equipped with three Compound Z8 Remote Gas Grenades, remotely detonated gas canisters that will damage and possibly kill whoever it comes in contact with.

Porter requested a portable defence system that could deliver the most damage to intruders in a targeted area. Fashioned with a remote detonator, Porter can view the results from a distance. The mines are filled with a collection of biological substances, that on their own are inert, but when combined, have a more volatile effect. The resulting concoction incapacitates anyone exposed to it. 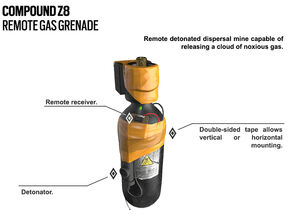 Controlled tests of the Compound Z8 Grenade required a number of measures including limiting the presence of lab personnel to only the most critical. Strict rules surrounding the PPE disposal (personal protective equipment) and protocols for hazards had to be maintained at all times. Even though the facility is state-of-the-art, additional precautionary measures were required before testing could begin.

The Compound Z8 Grenade mixture's incapacitating agents are comprised of - (substances are classified and so have been redacted from this document by the order of the Director of Research and Development). As such, the presence of Specialist James Porter and Specialist Liu Tze Long is required at all times, including for any future testing.

First tests were basic data gathering, including the structural integrity and design of the canisters, as well as deployment timing and range of effect. Evaluation also included a series of tests to measure exposure guidance levels, and where necessary, antidote compounds are being reviewed as well. Data results are still being processed and will be attached when they're ready.

Smoke's armed with an FMG-9 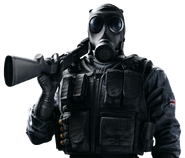 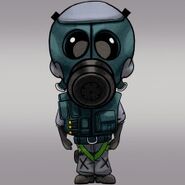 Smoke in the Bushido Set

Smoke in the Mamba Bundle

Smoke in the Watch_Dogs 2 Set

Gas Canister before and after 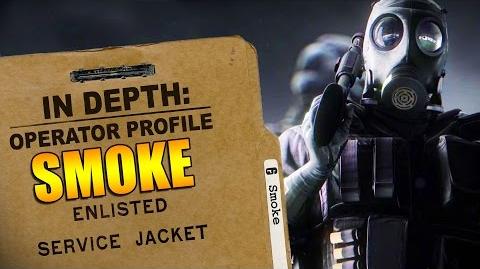