"HAHAHA! About time someone pulled the smoke alarm."
— Smoke

After the horrors in Truth or Consequences, SMOKE did not hesitate to join REACT to combat the new Parasite threat. A self-taught expert in chemistry and biology, he is especially well suited to engage the Archæans and brings a wealth of operational experience to the team. His specially designed Z9 toxic gas grenades are particularly effective against these new enemies.

Assessing Porter's expertise in fields of chemistry and biology. Self taught. This speaks a certain amount of discipline. (QUERY: drive, determination)

A Medium Armored Operator, Smoke is equipped with three Compound Z9 Remote Gas Grenades, remotely detonated gas canisters that will damage and possibly kill whoever it comes in contact with. Smoke is immune to the effects of the gas cloud.

Other operators are immune to damage from the gas cloud, and Archaeans in the cloud are considered Smoked for the purposes of takedowns. 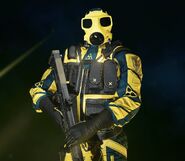