watch 02:34
Wiki Targeted (Games)
Do you like this video?
Play Sound

A Fiberscope is a flexible fiber-optic bundle with an eyepiece on one end and a lens on the other that is used to examine and inspect small, difficult-to-reach places such as the insides of machines, locks, and the human body.[1]

It is featured in several installments of the Tom Clancy's Rainbow Six franchise. 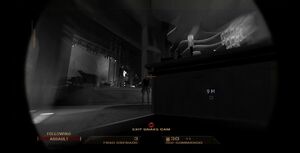 The Snake Camera is a gadget featured in Tom Clancy's Rainbow Six: Vegas. 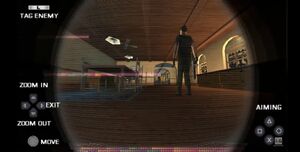 The Snake Camera is a gadget featured in Tom Clancy's Rainbow Six: Vegas (PSP). It functions in a similar manner to its console counterpart. 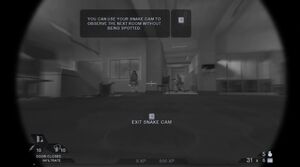 The Snake Camera is a gadget featured in Tom Clancy's Rainbow Six: Vegas 2. Only available in singleplayer, it allows Bishop and Knight to peek under doors to check out the map and enemy layout in the next room. It also allows the player to see how many tangos are inside, their position, & can be used to mark two tangos as primary or secondary targets with red icons above them for your squad or partner (if the door can be penetrated then you can mark them and shoot them through the door for some assault points) in coop mode to take out and choose which of the tactics below to use.

Retrieved from "https://rainbowsix.fandom.com/wiki/Snake_Camera?oldid=80193"
Community content is available under CC-BY-SA unless otherwise noted.