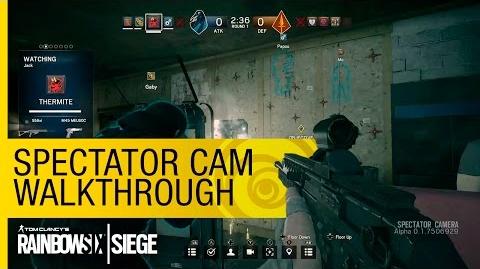 Spectator Camera is a feature of Tom Clancy's Rainbow Six Siege. It allows an eleventh player to join a 5v5 multiplayer match and observe players and learn their tactics as well as more about the game. Due to its ability to compromise team positions, it is only available in Custom games and not Casual or Ranked multiplayer. It was released in the Operation Black Ice expansion.

Observers are able to view players of both teams in either first or third person. These players are highlight in their team's color of either blue for the attackers or orange for the defenders. An overhead view is also able to be used when using the Spectator Camera. This includes the Tactical view which allows observers to view each and every floor with the ceiling or roof cut away.

Tactical Camera as seen on the Spectator Camera
Community content is available under CC-BY-SA unless otherwise noted.
Advertisement