The map takes place at a refurbished stadium in Greece. At the center of the arena is a kill house which is made up of elements from other maps in the game. Additionally, the map introduces bulletproof glass to create new situations. The map may only be played on the Bomb gamemode. Each match starts with Attackers either rappelling from a platform above the kill house, or spawning on the ground. Care must be taken when rapelling from the platform, as defenders can throw a Nitro Cell onto the top of the vent in the center of the roof, killing anyone rapelling down the middle of the platform.

MEMORANDUM ON "THE STADIUM"


TO: ALL OPERATORS
FROM: MIRA

Operators, as head of R&D, I would like to welcome you to your new home away from home! Mi casa es tu casa!

As you probably have already noticed, the stadium itself was originally built for a series of commonwealth games back in the seventies. Like so many other around the world, it was soon forgotten and left to rot. But now, thanks to The Program, the entire facility has been rebuilt, redesigned and resurrected just for us! I personally worked very closely with the engineering team, making sure we had absolutely everything we needed to really push ourselves to our limits.

Everything is state of the art; gyms, medical bay, gun range, dormitories, around the clock all you can eat cafeteria, lounges, and even a movie theatre. Not to mention, an enormous new R&D lab that Kali and I will be putting to good use developing new toys for us.

And what better place to try them out than in the new, fully modular map system! Within a reasonable delay, the map can be completely re-configured, combining any number of pre-designed room modules and passageways to connect them. It will challenge us, always presenting a new sandbox to train in. Even the sidelines for each team are equipped with a full pit-wall, allowing downed Operators to continue monitoring our teammates and giving assistance whenever possible.

I am sure it will take you no time to find your way around. If you have any questions, you can probably find me in the lab blowing something up.

Each Operator will be wearing a SIM-SUIT that has been developed by R6-LABS. It is their first layer of clothing, worn beneath all of their combat gear. The SIM-SUIT provides real-time telemetry of all contact the Operator receives and calculates its simulated damage, providing near-instantaneous feedback.

Once simulated damage has reached or exceeded its limit, Operators must remain immobile. They will then be alerted when all other Operators have cleared their vicinity, exiting the Map and heading off to their respective sidelines. Naturally, all headshots are “instant-kill”. It is important to note that the SIM-SUIT provides no protection to the Operator. The simulation rounds and explosives used during the tournament are non-lethal and when contacting an operator, detonate as white smoke. However, they are still ballistic, high-energy projectiles. They will hurt. And depending on the point of contact, they will hurt a lot.

Finally, while the system allows the Operators to absorb more “damage” than real-world combat, the “softer” lethality will demand more from them; they will have to work harder for their “kills”. 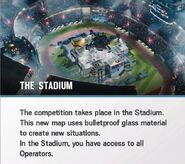 Retrieved from "https://rainbowsix.fandom.com/wiki/Stadium?oldid=71123"
Community content is available under CC-BY-SA unless otherwise noted.