A smaller version of the map known as City Street Small is available in the Black Thorn expansion.

The Streets of this abandoned shanty town in Mexico have been used as training grounds for close-quarter combat by elite counter-strike units. The map features two floors and a basement that players can use to plan their attacks and movements.

When playing a team-based multiplayer game mode, each team's characters generate in one of two buildings that are directly across from one another. While the purpose for the buildings are somewhat similar, they each feature a different floor layout and different objects that can be used as cover. Each building does however feature a stairwell to the second floor, a door that leads to the courtyard, a front deck that provides limited cover, a ladder that leads to the basement, two windows on the second floor that are equipped with rappel ropes, and a wide range of boxes stacked on top of pallets to proved cover for players.

The basement of the Streets is a large underground area that features many ways to provide cover, hide from enemies, and escape from danger. While the hallways do get a bit narrow in certain locations, the basement makes up for this downfall with several exit and entrance points. If players wish to go from one building to the other without passing threw the open courtyard, the basement makes for a reasonable secondary approach.

In the middle of the courtyard is a small concrete building that has a stairwell that leads to the center of the basement. Inside this area there are two large windows that leave players vulnerable to attacks from both sides, however the doorway leading to the courtyard is directly parallel to a door leading into one of the smaller two story buildings, giving players the ability to quickly get to safety. On the opposite side of the building as the doorway is a latter that leads up to an open section on the roof. On the sides of the roof are multiple sandbags that can be used for cover, however, without protection or multiple players this is a very vulnerable location due to the ability other players have to easily target the open area. 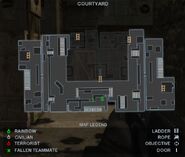