"Delivers a non-lethal explosion that blinds nearby people."
— In-game description 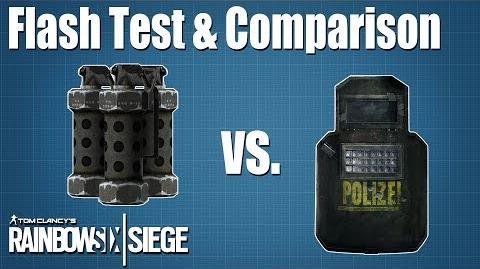 The Stun Grenade is a gadget featured in Tom Clancy's Rainbow Six Siege.

The Stun Grenade is a non-lethal grenade that temporarily blinds and deafens Operators within its range of effect.

Stun Grenades are very useful for room clearance, where they can give the Attackers an edge over the Defenders. Stunned Operators cannot see or hear for a period of 5 seconds. They still can move, however, allowing for a stunned person to get into cover and wait off the effects.

Stun Grenades detonate 3 seconds after they are thrown and cannot be "cooked" to reduce the detonation time.

When the enemy is facing towards a Stun Grenade, its maximum reach is 15 meters, with full temporary blindness being caused at distances up to 11 meters. Facing away from the Stun Grenade limits the effective range at which visual impairments will be caused down to only 3 meters. Tinnitus and temporary hearing loss starts at 8 meters distance, independent of the target's orientation.

As such, it is important to coordinate its use with teammates as it will also affect allies and could ultimately lead to their deaths.

Stun Grenades do not affect observation tools such as Cameras and Drones. Operators flashed by Stun Grenades will not be affected if they're viewing cameras. However, the effects will apply as normal if they get off cameras before the stun effects end.

Getting hit directly by the Stun Grenade deals 5 points of damage, like any other throwable gadget.