Edit
watch 02:58
No Man's Sky Update - The Loop
Do you like this video?
Play Sound
For the other variants, see SPP and MP9

The TMP is a machine pistol manufactured by Steyr Mannlicher that chambers the 9x19mm Parabellum round. The TMP is manufactured with a vertical foregrip by default for more stability. The design for the TMP was eventually sold to Brügger and Thomet in 2001 who produces the TMP under the designation MP9, retaining much of the original design.

The TMP is categorized as a submachine gun in the Rainbow Six universe.

The 9mm TMP SMG is a modern compact submachine gun. It is blowback operated, locked breech design with a rotating barrel. The TMP is reported as a very controllable and comfortable to fire firearm. 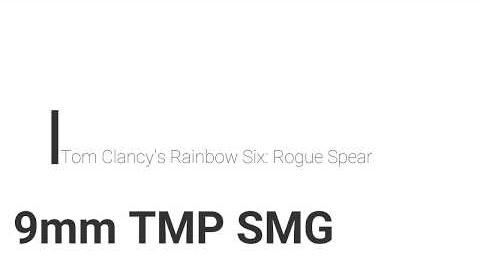 The TMP is a weapon featured in Tom Clancy's Rainbow Six 3: Raven Shield. The TMP in game is always equipped with a fixed stock and suppressor. The player can not take these attachments off since they are always modeled on the gun.

The TMP is a weapon featured in Tom Clancy's Rainbow Six 3 (Console).

The TMP is a weapon featured in Tom Clancy's Rainbow Six 3: Black Arrow.

"This Austrian made submachine gun has a built in foregrip and a pistol grip loaded magazine. It is constructed without a buttstock for increased maneuverability. Normally the TM 41 uses the Scope, Red Dot or Suppressor attachments."
— In-game description

The TM 41 is a weapon featured in Tom Clancy's Rainbow Six: Lockdown. In the PC version of the game, the TM 41 is used by Faisal Amidan's militia in the mission Algeria.