"They told me I’d died. They were wrong. I was reborn."
— Tachanka

Tachanka was reworked in the Operation Shadow Legacy expansion. He was made available on the Test Server on October 8th, 2020[2][3] and was released on November 17th, 2020.

Alexsandr Senaviev was born on November 3rd in Leningrad, Russia to a military family. At the age of eighteen, Senaviev was conscripted into military service just as the Soviet Union was ending its operations in Afghanistan. Upon the dissolution of his draft, Senaviev opted to enlist full time. He was part of the wrestling league, where his formidable frame and match strategy earned him accolades. Along with heavy artillery, Senaviev's training focused on defensive and breaching tactics, and while there he apprenticed as a precision tool and die machinist in the weapons division. Senaviev applied for a transfer to the Russian Navy but for classified reasons remained in the Russian Armed Forces. Senaviev was later transferred into the Spetsnaz shortly before the collapse of the Soviet Union. He would go on to marry and have kids, though the relationship later ended in divorce. Senaviev would later go on to join Rainbow sometime in 2015.[4]

On November 13th 2016, Senaviev was declared clinically dead for two minutes following an operation on the field. During his recovery at Hereford Base, his mounted RP-46 Degtyaryov Machine Gun was modified by Mira to include a ballistic shield to prevent future injuries. In October 2020, he was issued an Shumikha Grenade Launcher in order to become more mobile. Unable to part with the RP-46, Senaviev modified it to be portable.

Calm in crises. Alex harbors a joyous, if acerbic outlook. He has a limited social filter, which has gotten him into trouble in the past.[5]

Calm in a crisis: Specialist Alexsandr "Tachanka" Senaviev's original file doesn't cover much more than that. So along with our meeting, I wanted to dig deeper into field reports and observe him in training before I could reassess his background.

Senaviev has a boisterous sense of humor with a booming laugh. He can be quite blunt, but without the intent to offend. Personally, I appreciate someone with clarity. […] He's dedicated to his team and is focused and calm during operations. That said, I've also observed some frustration. There's a contingent of specialists who passionately support him, yet Senaviev feels he has potential that he doesn't know how to maximize. It's clear he wants to be a devastating force so I suggested changing his approach. If he studies his team, in particular, he should search for gaps in their strategy. it's there he may just find a place where he fits. […]

Senaviev's younger sister is a doctor and our discussion had barely started when he was showing me pictures of her in her doctor's smock, along with a dozen more photos of his nieces and nephews and his own kids. […] He and his sister grew up in a strict household without many things, which is why he makes a great effort to enjoy life. They both make sure that their kids are loved and raised with laughter. At the same time, he doesn't like to buy or accumulate physical objects and emphasizes this with his children, much to their consternation. I suspect that's also partly to do with his divorce. […]

Though Senaviev is dedicated to his country and appreciates the life his patriotism has brought him, he has adamant that his son and nephew not make a career out of the military. "They can do the obligation," he told me. "Then go be useful in something else." And so what Senaviev wants for his family and friends - for them to find a role where they feel useful - is what he's trying to find for himself. It's up to Rainbow, as a team, to guide him.

In his reworked version, Tachanka is still a Heavy Armored Operator, but he is now able to be more mobile than before. His RP-46 Degtyaryov LMG can now be selected as a primary weapon, and still has the same destructive power as before.

His new Unique Gadget is the Shumikha Launcher. An antique grenade launcher that launches incendiary grenades which explode 0.75 seconds after the first bounce, leaving behind a wall of fire that can damage Attackers and block off entranceways. The grenades can be bounced off any surface, allowing the player to perform trick shots or strike targets without direct line of sight. Each grenade burns for 7 seconds each, Tachanka gets 14 of these with a maximum of 7 full rounds and then he must reload. The Shumikha Launcher grenades function similar to Capitão's Asphyxiating Bolts or Goyo's Volcán Shields, respectively the fire effect. There is a mild arc to each grenade's flight trajectory. In order to reach farther distances it will be necessary to aim further upwards.

A Heavy Armored Operator, Tachanka comes equipped with the deployable mounted RP-46 Degtyaryov machine gun that can be used by both teammates and enemies alike. With a frontal shield to protect incoming fire at the user's head, it can be used to anchor a position and block off corridors or doorways with sustained fire.

"The Shumikha is capable of launching multiple incendiary projectiles that, like Tachanka, are equipped with very short fuses…"
— Mira

Tachanka’s new gadget, the Shumikha Launcher, is perfect for area denial and for covering unfavorable angles. Its heavy incendiary grenades can bounce multiple times, and their fuse timer only starts after the first bounce, giving them a lot of versatility. The launcher is an easy-to-use gadget that you’ll need great practice to properly master. As an alternative to Smoke's Grenades, Tachanka’s Launcher can react faster to enemy push by covering more than one angle and benefitting from a high rate of fire.

Tachanka is equipped with 14 grenades at the beginning of a match and the Launcher can hold up to 7. For maximum effectiveness, use several grenades together to cover a wider area and prevent your opponents from avoiding them. Once launched, only one canister will be able to reload at a time. The DP27 features a low rate of fire and can break rotation holes on soft walls. This places Tachanka into a critical position, as he can remodel defense points and create his own angles to launch his grenades.

A collector of antique weapons, Senaviev prefers to use original parts rather than modern variants from Somalia, Libya, and Syria, to maintain his RP-46. He utilizes the international collector's market for replacements or will mill his own components when parts cannot be located or are not cost-effective to acquire.

Following an incident that left Senaviev clinically dead for two minutes, his mounted RP-46 Degtyaryov Machine Gun was inspected. Having been decommissioned in the 1960s, the RP-46 Degtyaryov was one of the last machine guns manufactured by the Soviet Union. Aware of the Operator’s preference for such antique pieces, Six asked for the weapon to be upgraded to meet safety measures. The team of engineers led by Elena “Mira” Alvarez added a ballistic shield that protects the head from frontal shots. This shield can be destroyed separately from the rest of the turret. Mira was also tasked with adding a light customization on the Mounted LMG as a personal touch for Tachanka.

I was surprised when Tachanka – Specialist Alexandr Senaviev – brought in his - new toy in for inspection. Considering the fondness he had for the mounted LMG, despite the damage it had taken over the years, I figured he'd be buried with it. He won't tell me what he plans to do with it now, though I wouldn't be surprised if he displays it somewhere in his home.

One thing is for sure, taking the Shumikha on missions will lighten his load. After testing I can guarantee Tachanka can do just as much damage with the grenade launcher as he has done with any other weapon. I'm particularly interested in the "bounce" effect of the grenades. Much like Tachanka's sense of humour, they seem to land flat - but once the fuse burns down, the area goes up in flames. Since he's used to immediate deployment and damage output, Tachanka must adjust his timing to compensate. That said, I have no doubt he'll enjoy it. 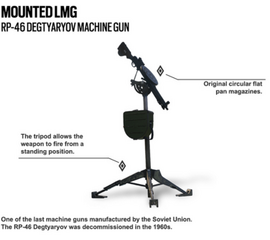 Yesterday my day started with being handed a flight case that looked like it has been dropped ten thousand feet from a plane, and then dragged behind the delivery van before it reached us. Inside, the LMG has as many battle scars as the outside case. Even before checking with Tachanka - Specialist Alexsandr Senaviev - I knew that's how it looked when it was put inside.

Tachanka doesn't want anyone to "touch his toys" but he understands these evaluations are crucial for team operations. The LMG has had so many modifications to it already - mostly by Senaviev - that it's in a category of its own.

We are in the process of testing a number of prototype options. In the meantime, I've attached a list of possible adjustments we can make to this LMG, if I can get Tachanka to let us make changes. 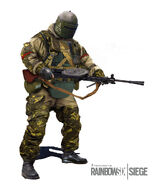 Tachanka armed with an SASG-12

Tachanka armed with a 9×19VSN 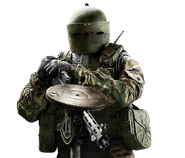 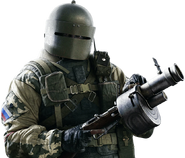 A very buff Tachanka posing in an artwork

Tachanka with his improved Mounted LMG and Mira (artwork).

Tachanka in the Bushido Bundle

Tachanka in the Ballistic Bundle 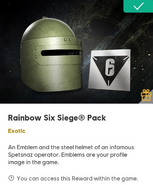 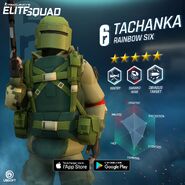 Tachanka as he appears in Tom Clancy's Elite Squad

Promotional image for Tachanka in the mobile game, Arknights

Teaser image for Tachanka in Arknights

Character sheet for Tachanka in Arknights

Promotional image for an available skin for Tachanka in the game Arknights. 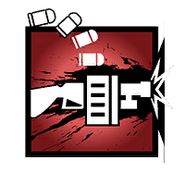 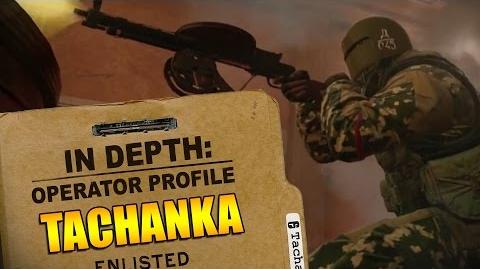 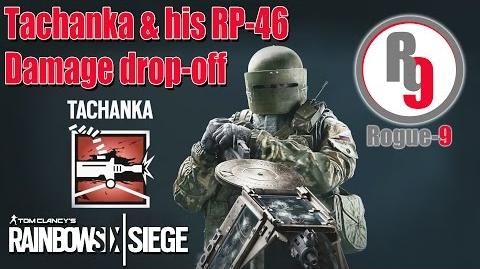