"Soviet, very old. Wait... I'm Russian so I supposed to know something about it?"
— Tachanka

In February 2018, a mysterious alien Parasite dubbed the "Chimera virus" was unleashed on the town of Truth or Consequences, New Mexico. Over the next ten days, the parasite infected the majority of the town's population though government officials were able to successfully contain it for the time being. Those infected by the parasite began to be known as "Roaches". At the request of Eliza "Ash" Cohen, Aurelia "Six" Arnot sent Tachanka, Jordan "Thermite" Trace, and Gustave "Doc" Kateb to meet Ash at a command center outside of the city and initiate Operation Chimera.

Tachanka later arrived at the site with Thermite and the pair entered Ash's tent. Ash was on a video call with Doc who used an infected severed arm to show how the parasite mutated to "create monsters". Trace asked Ash if it was contained and was told that while it was for the time being, the parasite was adapting faster than they could track. Ash then stated that if the parasite broke containment and crossed the border into Mexico, the world would be in for a "long, bad night". Thermite suggested that they nuke the town but Tachanka scoffed at this suggestion. Ash told Thermite that while it was on the table, they were there to make sure that they keep that as a last resort and that operators were already in the field.

Tachanka participated in several missions within the town such as the destruction of nests at the town's Sierra Paradose resort and the rescue of Ellen Mackintosh and her research from the town's hospital. Some time later, Tachanka was called into Ash's tent and started shopping for weapons on his phone while he waited for her briefing. Ash told him of how the parasite was found by Boyd Brooks in a capsule that had crashed outside of the town and was brought back to his junkyard in hopes of selling it online. Tachanka looked at Brook's online listing and pointed out that the capsule looked to be Soviet. He then realized that he had been bought there due to his Russian nationality. Ash pointed out that she thought that he would appreciate the heads up and that it would be up to Six to deal with the politics. She then told Tachanka that it was their job to secure the capsule. Through their efforts, they were able to secure the capsule which allowed Marius "Jäger" Streicher to extract it back to base with an Osprey. Despite their efforts, the town was eventually destroyed and the Parasite was able to break containment.

Over the next few years, the Parasite had evolved and remerged in other areas across the United States. New containment zones were subsequently established around afflicted areas. REACT was formed as a military branch of Rainbow, specializing in containing and studying the Parasite. Tensions rose between Russia and the United States as Russia grew reluncant to provide assistance, fearing the Chimera Parasite would infect their personnel and make its way to it shores. Despite this, Tachanka was very vocal about joining REACT and was eventually given authorization.

This page features a Codex Entry.

Assessing influence on team dynamics: Despite Senaviev's boisterous attitude in the face of danger, he is recognized as a calming influence during operations. Possibly an effect of his confidence. He will be an asset to have in high-stress incursions against the Chimera. (INSERT: J. Trace - Couldn't agree more. The Lord's a beast.) (Context Query: "beast" ... UNDEFINED)

Speculating on Senaviev's motivations: He is driven to do what's right using the means at his disposal. (QUERY: altruistic)

Senaviev's resistance to upgrade some of his archaic weaponry defies explanation. (INSERT: A. Senaviev- Bah! This machine knows nothing.)

A Heavy Armored Operator, Tachanka comes equipped with the deployable mounted RP-46 Degtyaryov machine gun that can be used by him and his squadmates. With a frontal shield to protect incoming fire at the user's head, it can be used to anchor a position and block off corridors or doorways with sustained fire. 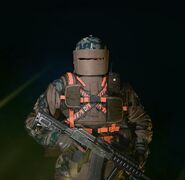