"Lots of wild stuff happens in the funky, artistic Tenderloin neighborhood. But no one expected the Parasite."
— Description

Tenderloin is a map featured in Tom Clancy's Rainbow Six Extraction. It is set in the San Francisco region.

The three subzones of the map are UFO Museum, Punk Club, Tenderloin Alley.

UFO Museum is made up of displays and gift shops themed around aliens. Each of these rooms revolve around a large diarana of a city in the center of the museum.

Punk Club is composed of bars and and a large concert stage. It has multiple levels which are important to remember when engaging enemies or trying to remain undetected.

Tenderloin Alley is composed of an apartment, a workshop, a back alley, and a autorepair shop. 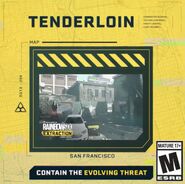 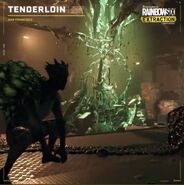 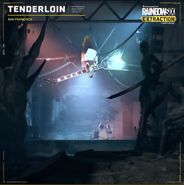 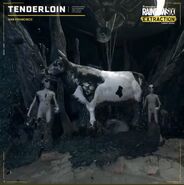