Edit
watch 01:35
Rainbow Six Profile: Thatcher
Do you like this video?
Play Sound

"GPS satellites? Unmanned drones? Fookin' laser sights? The more crutches you have, the more it hurts when they're kicked out from under ya. If there's one thing I know for sure, it's that a six inch blade never loses reception."
— Thatcher

Mike Baker was born in the coastal town of Bideford, England. Baker hailed from a long line of dockworkers and soldiers. Despite family pressure to join the family trade as a stevedore, he enlisted for active duty at age eighteen, though his younger brother Paulie would eventually become one. Despite this, Baker purchased and lived on an old ship in drydock called the Iron Maggie. Baker repaired the ship in his free time and frequently helped his brother out who was known to frequently incur debt with locals.

Immediately thrown into politically-charged conflicts, Baker's performance was exemplary. Further training and another conflict gave him a Distinguished Flying Cross and Conspicuous Gallantry Cross. His keen sense of observation and decisive manner, combined with his close-quarter combat techniques, made him invaluable on VIP protection detail.

Baker and James "Smoke" Porter teamed up and joined forces with SDU Operator Liu "Lesion" Tze Long on the latter's first operation, Operation Green Viper. Upon completion of the mission, the two helped celebrate Lesion's first successful mission with an extra day in Macau, filing the event as an off-duty bonus.[1]

A veteran of three wars, Baker was the oldest SAS operative on active duty until he was recruited by Rainbow in 2015. With extensive field experience and proficiency in SAS tactics, Baker was a critical asset to any Rainbow operation. He has honed his expertise with protective measures and electronic counter-measures and frequently worked with engineers to advance the equipment. As a Warrant Officer Class 1 (Regimental Sergeant Major) Baker served as a respected and effective mentor to new recruits.[2]

During a training exercise in 2018, Baker punched GIGN operator Olivier "Lion" Flament because of a comment the latter had made, almost resulting in a fight breaking out between their respective CTUs.

Following the conclusion of the Six Invitational in early 2022, Nighthaven cut ties with Rainbow and poached several operatives, including Smoke. This deeply affected Baker as he felt betrayed by his former teammate and friend. This was made worse by the revelation that Nighthaven was involved in criminal activity across the world. Baker was later placed on a team led by Yumiko "Hibana" Imagawa following Harry "Six" Pandey's reorganization of Rainbow.

A few months later, Baker learned that Ryad "Jackal" Al-Hassar had been asked to meet Hibana in Japan to investigate the assassination of Masayuki Yahata and that Nighthaven had been involved. Still feeling the effects of Smoke's betrayal, Baker tagged along with Jackal. In Japan, Baker and Jackal met with Hibana and Kana "Azami" Fujiwara at the site of Yahata's death. Jackal found two sets of footprints leaving the area and noted that one of the assaliants was badly injured. All of them then followed the footprints to a nearby abandoned factory. After entering the building and cornering one of the assailants, Azami stood and locked eyes with him as the other three operatives remained behind cover. Hibana yelled for the assailant to drop his weapon but was ignored. Baker then threw an EMP grenade to disorient and detain the man. Azami approached him and demanded to know where they had gotten their weapons from. The assailant explained that they had received an encrypted message about assassinating Yahata but believed it was a joke until they had received a crate full of Nighthaven weapons, intel, and money. Moments later, Jackal found the crate and the other injured assailant beside it. The man told Jackal that they had received another message once they returned to the factory telling them to stay put.

As if one que, a helicopter opened fire on them, killing the first assailant. Azami threw several Kiba barriers, enabling Jackal to pick up the injured assailant and allow all of them to run to safety. The incident later resulted in Azami's recruitment into Rainbow.

In 2025, Rainbow learned that the private military company Sentinel was mass producing a nerve gas agent called "Amber Ruin" on the remote island of Auroa with the intention of selling it overseas to foreign militaries and terrorist groups. Seeking to stop all Amber Ruin production, identify potential buyers, and create an antidote, Liu Tze "Lesion" Long coordinated with Scott Mitchell to conduct a joint operation with Ghost Recon called Operation Amber Sky. With Lesion acting as mission control under the callsign "R6 Actual", Baker was deployed alongside Eliza "Ash" Cohen and Lera "Finka" Melnikova. The trio managed to reach the island by replacing a major buyer who was coming to purchase Amber Ruin and met up with Ghost Team Leader Anthony "Nomad" Perryman. Through their efforts, they successfully managed to complete all mission objectives.[3]

Baker is highly observant, calculating and decisive. While his demeanor may denote traces of impatient cynicism, Baker possesses a profound sense of ethical responsibility. It is recommended to assign Baker with junior operators of strong moral conviction, whom he can mentor.

Knowing that Specialist Mike "Thatcher" Baker is cynical toward bureaucracy, I wasn't surprised that he was reluctant to meet me. I needed a different approach. Baker lives aboard the Iron Maggie, a boat in drydock that he repairs in his spare time. It's his "retirement plan." I suspect he moved there temporarily when his wife divorced him, be now he knows no other civilian home. […]

Baker has a distinguished record of military service. He's respected and in some cases idolized by those he mentors. When he welcomed me to his home, I could see why people describe him as down-to-earth. There's more to Baker's gruff, no-nonsense exterior - it just required some effort for him to trust me. […]

Raised in a coastal town, Baker has a strong connection with the water. We spent our entire meeting on the deck of his ship, overlooking the cold sea. Being someone who isn't handy - mastering a paper airplane as a kid was the peak of my craft - I wanted to know what Baker likes about boat building and working with his hands. He told me that besides appreciating the precision of it, he liked shaping the wood into something that has purpose. I suggested it was similar to how he mentors recruits. He replied that he doesn't care about the "why" of things the us "Uni types" do. […]

Specialist Seamus "Sledge" Cowden is one of his few close friends. Baker's tolerance of Specialist Mark "Mute" Chandar surprised me, since Baker is impatient with youthful bluster. When asked, Baker would only say, "Mute's a clever kid." He sounded almost envious. I wonder if Mute reflects someone Baker wishes he had been. […]

While by no means a Luddite, Baker does have an aversion to technology. To him, it's a tool - like a hammer or screwdriver - nothing more. The idea that people come to rely on it as a crutch is what annoys him. I suggested that he spend time in the engineering lab with Specialists Masaru "Echo" Enatsu and Emmanuelle "Twitch" Pichon. They have a lot to teach one another.

A Medium Health Operator, Thatcher is equipped with three EG MKO-EMP Grenades. These grenades disable all electronics that are within its area of effect.

The EMP's efficiency in anti-electronic warfare has been known and studied since the early 1960s and features prominently in media depictions, but practical battlefield applications have eluded CTU squads until very recently. Team Rainbow's engineers recently made a breakthrough in solving the problem of creating a localized fission reaction, while keeping gamma radiation to tolerable levels, resulting in the EG MKO-EMP Grenade, a personal handheld device. No one is more suited to wield this novel device than Thatcher, known for his warnings against over-reliance on technology.

One of the biggest challenges for a team is Specialist Mike "Thatcher" Baker's EG MKO-EMP grenade since the electromagnetic surge can disable electronic gadgets within its radius. The EG MKO-EMP disrupts - in some cases it can destroy - quite a few of our devices. It locks up my Cardiac Sensor as it can't detect another pulse!

The EMP is deceptively simple. It's the grenade's impact that charges the electron particles. That concentrated energy cascades across an area - even through walls - and spike nearby electronics. Short of wrapping ourselves in a Faraday shield to protect our devices, there isn't much that we can do against that.

Despite how... exhausting Thatcher's "I told ya so" can be, I appreciate how the EG MKO-EMP is an extension of his personality. The same could be said about each of use, but Thatcher really owns it, man. It's as straightforward and direct as he is and keeps us on our toes... and he loves every damn minute of it.

Thatcher armed with an AR33

Thatcher armed with an L85A2

Thatcher armed with an AR33 (Chimera)

Thatcher armed with an L85A2 (Chimera)

Thatcher armed with an M590A1 (Chimera) 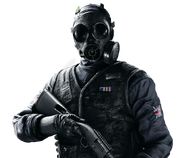 Thatcher in the Steampunk Bundle

Design of the EMP Grenade

Thatcher as he appears in Tom Clancy's Ghost Recon Breakpoint

Ash, Finka, Thatcher, and Nomad in the promotion for the Operation Amber Sky live event 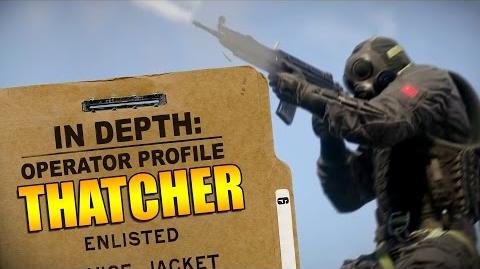