Edit
watch 02:56
Raise a Floppa - The Loop
Do you like this video?
Play Sound
Not to be confused with the Pilot Program.

The Program is a concept that was conceived and put into effect by the current Director of Rainbow, Harry Pandey, following his acceptance of the position in early 2019. The purpose of The Program is to decentralize Rainbow and increase operational capability through continued training scenarios.

"This is why I created The Program. To bring together our very best operators so that they may learn even more from each other, becoming even stronger when they are apart. Whatever CTU, organization or NGO they belong to, they will be able to take home the lessons they learn here and share them with those who will join our fight; a viral program of excellence and passion."
— Harry Pandey 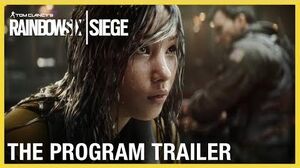 With the continued threat of terrorists across the globe, Harry realized that unknown variables made it impossible to effectively plan for the future. This fact made it unviable to simply deploy Rainbow anytime a situation arose around the world. To correct this, Harry sought to decentralize Rainbow from Hereford Base in England by creating facilities across the globe. Each facility would offer a place for Operators to live and train with one another.

This would then result in each Operator having a better understanding of one another to become stronger teammates. Additionally, the lessons each Operator learned during training could then be shared with their units. This would effectively increase the operational capability of Rainbow and each local CTU. To ensure the safety of each Operator, Harry had Mira develop the SIM-SUIT so that simulated rounds could provide realistic feedback akin to real ammunition.

Harry established the first of these new locations at an abandoned Stadium in Elis, Greece that was once used for a series of commonwealth games in the 1970s. Harry tasked Mira and Rainbow's Engineering team with renovating the entire facility to ensure that it met all of their requirements. The Stadium was transformed into a state of the art facility. It featured a gym, medical bay, firing range, dormitories, cafeteria, lounges, R&D lab, and a movie theatre. A modular kill house was also constructed in the center of the old stadium. This allowed for it to be reconfigured at any time to create new situations for Operators. A full pit-wall was also constructed on the sidelines of the kill house to allow downed Operators to continue monitoring teammates and provide assistance when needed.

In early 2020, Harry launched the first annual Tournament of Champions to coincide with the Six Invitational. The purpose of the tournament was to act as the ultimate test by culminating everything each Operator had learned within The Program. Under the guise of a public training exercise for CTUs across the globe, the event allowed the public to enter the Stadium and observe each match. After several hard-fought matches, the final match was won by the Attacking team which was made up of Dokkaebi, Sledge, Hibana, Blitz, and Thatcher. Afterwards, Harry interviewed both teams to hear their thoughts about the match and what they could've done better. He also explained that the interviews would be recorded for internal-use only.

A few months later, Harry sought to gather skilled instructors from across the globe to help with training of Rainbow Operators. In 2020, Harry formally established the Rainbow Operation Staff as a training division of Rainbow. He then recruited Sam Fisher as the division's first instructor. Sam was brutal in his training sessions at the Stadium, regularly taking down entire teams singlehandedly.

With the Six Invitational fast approaching, Harry sought to structure it differently from past years. Harry had chosen several specialist to form teams with each team having a captain to lead it. Harry believed that by teaming up Operators that normally had difficulties working together, the experience would be beneficial to The Program as a whole.