"Team Rainbow has been called to raid an abandoned theme park on the shores of Hong Kong. Lead a lethal raid in this challenging perimeter. Get ready to discover a colorful and eclectic new map filled with dynamic and fast-paced face-offs."
— Ubisoft Description

The most notable change in the rework was the removal of the entire rail platform inside the map. Aside from the train, this also includes the rail overlook, lift car, and their ramps. This results in the map lines of sight being constricted to prevent spawn peeks.

The East and West sections of the building have been brought closer together, with Yellow Corridor (previously named Cafe Corridor) and Bunk connected to Office and Initiation Room through breakable walls.

Inside the building, there are a few things to notice, which mostly involve the East section. The downstairs area has been remodeled with a thematic that represents the map’s origin, with the Gargoyle and Haunting Dining bomb sites replaced with the Throne Room and Armory pair. The new Gong Room in this area also becomes the main entrance, with Arcade Entrance being blocked off South-West. Dragon Stairs, previously named Haunted Stairs, now faces East instead of North.[2] 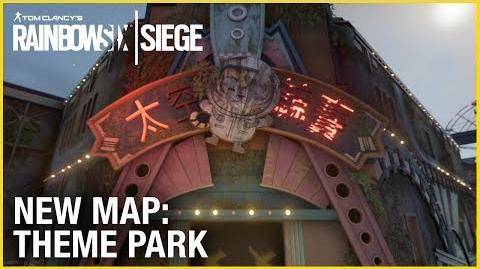 Retrieved from "https://rainbowsix.fandom.com/wiki/Theme_Park?oldid=63368"
Community content is available under CC-BY-SA unless otherwise noted.