Start a Wiki
watch 01:24
'Rainbow Six' Profile: Thermite
Do you like this video?

"When you mix fuel, metal oxide and metal powder in just the right way, it burns at 2000 degrees Celsius. Hot enough to cut through nearly any barrier known to man. Throw some C4 into the mix, and you've got one hell of a combination."
— Thermite

Trace joined the Corps straight out of high school, making him a fourth-generation Marine. Following his first tour of Iraq, he obtained enough experience to volunteer as an explosive ordnance disposal technician. After his second tour of Iraq, Trace returned to the U.S., enrolled at Texas A&M, and earned a Bachelor of Science in Chemistry. He brought his experiences and skills to the FBI, where he spent fours years as a field agent with the Hazardous Materials Response Unit. Seeking more dynamic environments, Trace transferred into FBI SWAT, where he excelled at developing new barricade protocols. He then earned a spot in Rainbow where he's shown further interest in research and development on gadget upgrades. Trace's hometown of Plano has a major concentration of Chinese Americans, and as such Trace has conversational level of Mandarin.[3]

For someone so disciplined and orderly, Specialist Jordan "Thermite" Trace likes to surprise. He can be a practical joker and he's always ready with a smart aleck comment. Beneath the surface, however ,the recent loss of his sister to cancer, and the death of his mother a few years prior, have made it difficult for him to channel his thoughts and energy with the focus to which he is accustomed.[…] I am concerned that he uses humor to avoid his grief. It's important he understands that some coping mechanisms can delay the healing process. There are resources that can help him, and I will continue to offer them when and where I may. […]

Trace demonstrates strong tactical leadership, but can also plow ahead without consensus. I don't believe there's any lasting friction with other team members. He's well-liked by the others and has a solid working relationship with Specialists Yumiko "Hibana" Imagawa, Mike "Thatcher" Baker, and Emmanuelle "Twitch" Pichon. He can be quite the social-butterfly in his downtime. […]

A few things to work on: Trace has excellent communication, when he chooses to use it. He has good strategies but sometimes tends to "lock in." I know that he's capable of being a more agile thinker, so I've given him some tips on how to recognize when he's becoming too... bullheaded. […]

There's a lot going on behind his smile. I'd like him to find a way to regulate himself, to find balance for his work and private life. Trace doesn't show obvious stressors, opting instead to channel any anxious energy into something positive such as the R&D lab. It has been difficult to convince him that he needs a break from his role and identify as an operator. Shifting his attention to other intense tasks isn't a solution. […] I've given him some mental relaxation exercises that don't demand considerable time, but can be tackled throughout the day. Imagawa, in particular, can be a good influence on him since she regularly practices mindfulness techniques to focus and relax. I hope he will take her advice to heart.

A Medium Armored Operator, Thermite is equipped with two Brimstone BC-3 Exothermic Charges. These charges can breach through any Reinforced Wall within three seconds of activation.

Developed by FBI SWAT engineers, the BRIMSTONE was designed to breach reinforced locations utilizing a compact and portable explosive load that can deliver maximum force and destruction. As can be seen in the game, the charge first burns through the barrier and then blows that cut piece up with C4. The BRIMSTONE was effectively utilized in the field during a rescue operation in which several people were held hostage in a fortified farmhouse. (Which can possibly be a hint of the operation taking place in Oregon.) The destructive power of the BRIMSTONE allowed agents to breach a reinforced metal security door at the back of the house.


Thermite's Brimstone was one of the first devices tested in the new lab. It's the same way he has to be the first through any reinforced walls. Always has to be first.:) On the day of testing, Specialist Trace was busy developing additional prototypes as he did during Operation Chimera and wasn't immediately available. Since I'm very familiar with the Exothermic BC-3 Charge and have an expertise in explosive ordnance, I volunteered to conduct the evaluation. Our tests included adjusting the mixture stages to see if we could achieve stronger and more concentrated "melt". The results helped us clearly determine the chemical reaction times at peak temps. Our tests on the Brimstone BC-3 Exothermic Charge went well and produced some surprising results. Some were enough of a surprise to lure Thermite to join us (that was fun). We've been able to book extra time to apply some of the data to his prototypes. I'll file another entry as soon as we're done. 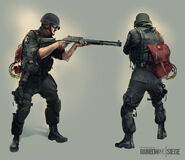 Thermite's concept art
Add a photo to this gallery

Thermite armed with M1014
Add a photo to this gallery 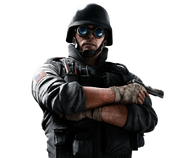 Thermite, Pulse and Castle in the Skull Headgear Bundle

Thermite in the Rock Star Bundle

Thermite in the Limerick Bundle

Thermite in the Military Police Set

Thermite, Castle, Pulse and Ash in the Ranger Bundle
Add a photo to this gallery

Thermite's Icon
Add a photo to this gallery 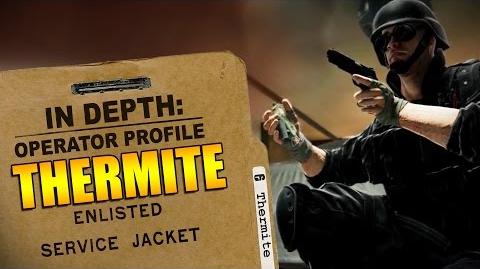 Retrieved from "https://rainbowsix.fandom.com/wiki/Thermite?oldid=70732"
Community content is available under CC-BY-SA unless otherwise noted.