"Preparation, speed, precision. These are essential when it comes to saving lives. And that's how I fly."
— Thunderbird

Born in the Nakoda Territories of Saskatchewan, Sky’s first lesson from her mother was the importance of community. Her first introduction to engines was at her father’s knee, he taught her to understand helicopters before she learned to fly one.

Always eager for new experiences she enrolled in the Bold Eagle Program at seventeen where she excelled in basic military training. While benefitting from the guidance of community elders and indigenous instructors, this program sparked an interest in preserving and protecting what she loved most, the Nakoda way of life.

After joining the Canadian Armed Forces Sky worked her way through flight school. Remembering her mother’s emphasis on the value of balance, Sky felt since the CAF taught her to take lives, she should also learn how to save them. She completed her Basic Medical Training (CFHSTC) and continued to serve in the CAF as an Aerial Medic.

In 2015, she found and rescued Sanaa “Nomad” El Maktoub in the Canadian wilderness. After giving Nomad medical attention, they were attacked by a black bear while Sky was repairing her helicopter. Sky was able to successfully fend the bear off and flew Nomad to safety. This later led Nomad to recommend her to join Rainbow in 2021.

Shortly after her recruitment, Sky was left a note by what appeared to be from Nomad. It mentioned an issue with the CC-295 in one of Rainbow's hangars, prompting Sky to investigate. She found the landing gear's hydraulic line had been cut as well as her missing necklace lodged in the plane upon closer inspection. Sky was then suddenly fired upon and shot in the leg. She managed to get to cover and heard a familiar voice taunting her with a nursery rhyme. Sky treated her wound to stop the bleeding and then used a machine to release smoke into the hangar. She then flanked her pursuer and kicked her in the head, revealing it to be Karina "Nøkk" Gaarddhøje. Sky told Nøkk that she knew something was off as she knew Nomad had terrible handwriting ever since she received frostbite in the Canadian wilderness. Nøkk stated that she wanted to test Sky as she did not trust Nomad's recruiting intuition. Holding no hard feelings for Nøkk's actions, Sky placed a bandaid on her head and helped her up. Nøkk apologized and said that while she trusted Nomad herself, she wanted to know that Sky was capable of handling more than "war games". Sky said she understood but asked Nøkk to leave their aircraft alone the next time she wanted to test her.

When Nomad first brought Specialist Mina “Thunderbird” Sky to our attention I wasn’t surprised by her recommendation. Sky is an accomplished medical officer, aviation mechanic and pilot. She seems to have the necessary drive, training and temperament to meld with Nomad’s team. I was, however, surprised that this was the first I have heard of her.

Had it not been for Sky’s medical training Nomad may not have survived the incident in the North. I wonder if that encounter inspired Nomad to welcome the friendship of a hunter like Specialist Frost. Given her background I feel that Frost and Sky would have much to bond over. Family is clearly important to Sky, and that goes beyond immediate blood ties. The Nakoda community had as big an influence on and hand in raising Sky as her parents. The knowledge passed down is not solely a history but a heritage to be practiced and preserved as a way of life.

Overall, Sky has an emotional awareness that’s born from understanding and acceptance. She seeks balance in everything she does. She describes the world and the human body as an engine. First you need to understand its purpose, and then how it functions. If a wire is shredded you can’t fix it with a screw, but a screw can hold a bone in place as it heals. I can appreciate the analogy, listen first then find a solution. That’s not to say she doesn’t lose her temper. What “gets under her skin” as Sky puts it is lack of respect. Respect for others, whether it’s their way of life or their right to life is essential to her principles.

Sky’s evaluation of risks seems to be tempered by her confidence and experience. After discussing some of her more harrowing adventures, I was concerned about her daredevil tactics. I did ask her what it felt like when she was in the air and if it was the adrenaline rush that fueled her. Her response was a smile and a simple, “It felt like flying.” I guess I deserved that…

Having someone who can watch your six, stitch you up, and fly you out is quite the trifecta. I’ve worked with Specialist Mina “Thunderbird” Sky before and I’m confident with her at my back.

Mina may seem like she takes risks as a pilot, but they’re calculated, she’s always in control of herself and adaptable to her surroundings. Though I investigated her background more extensively I am still affected by something she said when we first met. “If you break something you should learn to fix it, if you fear something you should seek to understand it, and if you hurt someone you should know how to stitch the wound.” I now know this wisdom came from her mother, and like all her teachings, Thunderbird honors it.

Growing up in the Nakoda Territories, it was her passion for preserving her community’s traditions that first led to her work in hydrology. She studied water storage, wastewater, and river management. She believes that understanding water’s relation to the earth is the first step in ensuring essential and accessible water sources for all peoples.

Thunderbird is nothing if not resourceful. I’ve seen her splint a broken bone with two sticks and a shoelace. But in our line of work we don’t always have time to tie shoelaces, let alone search for sticks. Her healing tech has come a long way since I first saw it. What impresses me most is the distribution method. She can’t be everywhere at once so I’m grateful to have another medic on the field, we can use as many friends as we can get. Sometimes a comforting presence while you heal is just as important as keeping you alive, luckily, she excels at both.

I wouldn’t have suggested we make Thunderbird an offer if I didn’t think she was a good fit, and I’m not just saying that because she saved my life."

A Light Armored Defender, Thunderbird's Unique Gadget is the Kóna Station, an automated dispenser which shoots out healing shots, similar to Doc's Stim Pistol. When deployed, the Kóna Station will target any Operator who enters its radius, either Defenders or Attackers, and shoot a healing charge to heal them for 30 health.

"Able to administer emergency aid unsupervised the Kóna Healing Station, like Thunderbird, is a friend to anyone on the field."
— Mira

When deployed on the ground, the Kóna Station acts as a point of safety for injured and downed Operators. All they have to do is approach the device, and the Kóna Station automatically boosts the Operator's HP or offers a revive.

Upon examination I will say I'm impressed with both the creativity and technical ability Sky used to put this healing station together. Finding chemicals with biocompatibility and bioabsorbable properties was critical to the success of the polyurethane foam capsules. The sensor combined with its 360 directional rotation allows the station to distribute the agent unassisted, enabling the operator to focus on other tasks and strategic placement. The Kóna healing station is almost as good as having an extra member on the team. The addition of chitosan with the pressure from the expanding foam can seal a bigger wound than medical cyanoacrylate adhesives. I think Doc will be excited at the prospect of no longer needing to extract fibers from healing wounds.

The only downfall of the station is its inability to distinguish between friend and foe, though that likely wasn't a priority in its practical application. That and its inability to withstand blunt force trauma. While I focused on its capacity to administer medical aid, I did not neglect to test its defensive abilities. Withstanding damage from conflagration is a desirable advantage, I'm glad Mira found a way to incorporate the technology onto Sky's existing tech. 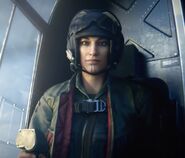 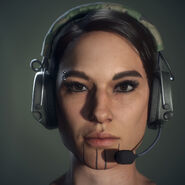