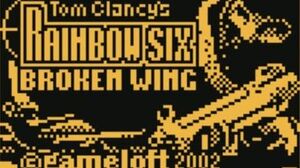 In Tom Clancy's Rainbow Six™ Broken Wing, the player controls an elite counter-terrorist soldier leading the charge to secure his country's freedom. The mission is to kill terrorists, rescue hostages and defuse bombs through 18 levels and 3 different locations in the Airport: parking & control towers, cargo area, and inside an airliner. This unique tactical shooter is true to the original spirit of Tom Clancy's Rainbow SixTM.

A groundbreaking title from the world of PC and console gaming, Tom Clancy's Rainbow sixTM Broken Wing is the game that every tactical strategy fan and action enthusiast should own.

The drama unfolds at New York International Airport, where you must lead Team Rainbow on a counter-terrorist mission. The story of Tom Clancy's Rainbow SixTM Broken Wing evolves in the course of playing the game, it puts you in the hot seat as you battle terror in your own backyard. Intelligence indicates explosive charges have been set in the control tower. You must defuse all bombs and secure the tower before a team can be dispatched to clear the main airport terminal.