Edit
watch 02:30
Dead Cells Final DLC - The Loop
Do you like this video?
Play Sound 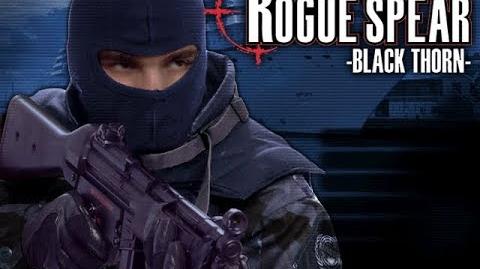 "In Rainbow Six: Rogue Spear - Black Thorn someone is recreating terrorism's most violent acts and Rainbow is back on the job. But this new deadly enemy knows how Rainbow thinks how Rainbow acts and how to stay one step ahead. This tactical first-person shooter expands on the Rogue Spear storyline but as a stand alone mission pack it does not require Rogue Spear to play. Face new single-player missions and multi-player maps in this squad-based shooter that combines classic Rogue Spear games types with an exciting new story and new weapons. Product Features 9 new single-player missions wrapped in a thrilling new story."
— Publisher's Summary

The plot features a mentally disturbed ex-SAS operative challenging Team Rainbow with reenactments of real-life terrorist attacks, such as the Entebbe crisis and the Japanese Embassy Siege.

The expansion originally had a release date of September 15, 2001 but was delayed due to the 9/11 terrorist attacks. This resulted in one mission involving a hijacked plane, BT01, being cut entirely. Another mission, Operation Blunt Scroll, was also changed to take place in a bus terminal instead of an airport terminal.