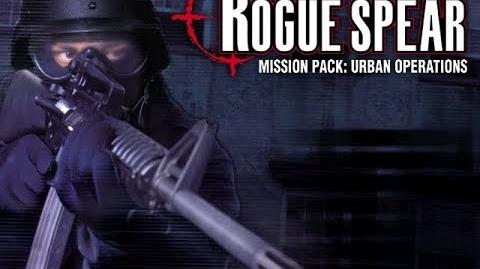 "Step into a counterterrorist team's worst nightmare--a hot fight in a densely populated area. Stray bullets could mean innocent casualties, and terrorists can hide amidst the frenzy of urban crowds. Tenement housing in Mexico City, the London tube system, the pulsing streets of Istanbul, or a hotel in Hong Kong--John Clark and newly appointed intelligence officer Kevin Sweeney take you into these concrete jungles, where you'll experience the most lethal missions the Rainbow Six team has ever faced. It's your wits, nerves, and training versus a barrage of cold-blooded, grenade-throwing terrorists--on their turf."
— Publisher's Summary

Team Rainbow is deployed throughout the world to deal with terrorist threats.

With the release of Urban Operations, a built-in mod system was added to manage user-made "mods" or modifications. Previous releases of the Rainbow Six series did not have this system, and using a mod required overwriting existing game content. With the mod system, mods could be used without overwriting, as they were installed into a separate folder within the installation and could be turned on or off. When a mod was activated, its content would take priority over the default game content. This allowed the addition and/or customization of all game content, allowing new operatives, weapons, maps, missions, etc. to be added.

Red Storm also released "unsupported" plugins for 3D Studio MAX and Photoshop, to aid in the creation of new content. This enhanced the popularity and replay value of the series for some time, as hundreds of modding teams within a large modding community released new mods constantly. Police and military organizations also sought the customizable game engine for training purposes, due to the realism of planning and mission strategy.

Because of these effects, a mod management system was later added to Red Storm's Ghost Recon series as well, although it was somewhat more restrictive.