Four months after the failed attack in Rio de Janeiro, Alvaro Gutierrez still commands a terrorist cell despite being incarcerated. Wishing to replicate Nikola Gospic's plans to start a new fascism movement across the globe, he instructs his associates to purchase new nerve agents from Giovanni Bagattini. In order to secure the funding for this purchase, he dispatches terrorists to steal art from the Castello Grande in Milan, Italy. Rainbow is recalled and successfully secures the building. Afterwards, Rainbow coordinated with Interpol and found that the terrorists were storing chemical weapons in a warehouse in Palermo, Italy. After securing the warehouse, Rainbow tracks and detains its owner, Riccardo Miccini. Miccini gives up Bagattini as the man responsible for storing the chemicals at his warehouse.

Bagattini agrees to turn himself in after being contacted by Rainbow but is then kidnapped and taken hostage by Gutierrez's associates before he can do so. Rainbow manages to rescue Bagattini and protect him from further assassination attempts. He informs Rainbow of Gutierrez's plan to distribute nerve agent in Athen's, Greece. With no other options, the terrorist make one final attempt to recover the chemical weapons from the warehouse in Palermo. Rainbow is able to stop the attack but discover that one chemical barrel had already been shipped to Athens before the warehouse was raided. Rainbow to launches Operation Athena Sword and manages to prevent the chemical attack. The next day, Gutierrez is shown reading a newspaper that details his failed terrorist attack. On the last page, he finds a note with the message "It's over" from John Clark. Two days later, he is found hanged in his cell.

Athena Sword features eight story missions and eleven custom missions, three of which have been taken from past installments. Like the base game, each can also be played in the Terrorist Hunt and Hostage Rescue gamemodes.

Athena Sword features eight multiplayer-only maps to the game. Like the base game, all campaign missions can also be played in multiplayer. 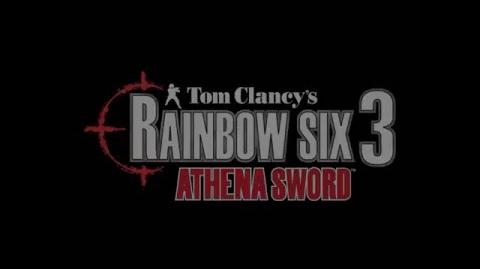