Tom Clancy's Rainbow Six Quarantine is an upcoming squad based tactical shooter and the fourteenth installment in the Tom Clancy's Rainbow Six Franchise. The game is set several years in the future and tasks a three-player team of Operators to work together and fight off the increasing threat of a technological parasite. The game was announced on June 6, 2019 at E3 2019.

Inspired by the Outbreak event, the game will see the return of various gameplay mechanics of Tom Clancy's Rainbow Six Siege. It will also use various Operators from the previous game such as Vigil and Ela. 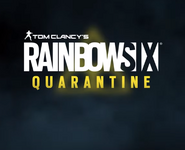 Retrieved from "https://rainbowsix.fandom.com/wiki/Tom_Clancy%27s_Rainbow_Six_Quarantine?oldid=62724"
Community content is available under CC-BY-SA unless otherwise noted.