It introduces Sam Fisher from the Tom Clancy's Splinter Cell franchise as a new Operator, dubbed Zero. The expansion also features a rework of Chalet and Tachanka as well as numerous core gameplay improvements and reworks.

For the full list of changes, see the Pre-Season Designer Notes. 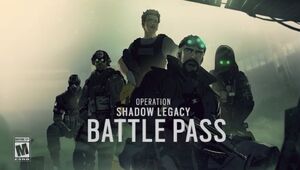 I can usually tell when I've made an enemy. This time, I don't know who's after me, or why.

I've been on the run before. Anyone who helps me is a target, but something tells me this group can handle themselves.

They call it The Program. I see some fresh faces, along with a few familiar ones. I'l make myself useful while I'm here. Teach them some new tricks...maybe some old ones too.

Welcome to the Class of Zero.

The expansion features its own Battle Pass known as "Class of Zero". It is composed of 70 tiers across a free and premium track. Each tier rewards players with exclusive customization items, Alpha Packs, currency packs, and boosters for a total of 94 rewards. Progression towards the Battle Pass can be earned in any playlist (excluding Training Grounds). It was released on September 10, 2020 and concluded on October 19, 2020.