Operation Steel Wave is the seventeenth expansion for Tom Clancy's Rainbow Six Siege. It adds two new Operators from NIGHTHAVEN and the South African ITF. The expansion also features a rework of House.

For the full list of changes, see the Pre-Season Designer Notes.

It isn't long before we realize the flames aren't the main event. A major heist is brewing on the other side of the city. Paris is awash in the fiery glow of flashing lights as the police and the GIGN strive to keep order.

Someone wants us confused and scared. The Program has taught us a thing or two about situations like this. Stronger together, our training gives us the edge we need and our gear provides the rest.

They'll never know what hit them. 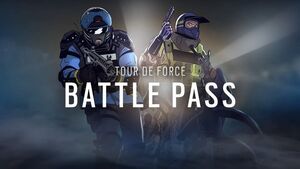 The expansion features its own Battle Pass known as "Tour De Force". It is composed of 45 tiers across a free and premium track. Each tier rewards players with exclusive customization items, Alpha Packs, currency packs, and boosters for a total of 61 rewards. Progression towards the Battle Pass can be earned in any playlist (excluding Training Grounds). It was released on June 29, 2020 and concluded on July 27, 2020.