"Brute force only gets you so far. Victory is determined in the mind of a strategist."
— Expansion Description 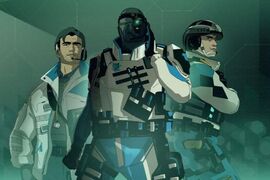 TO BE OF SERVICE

I could never put my finger on it, but helping people is what fuels me. The training, the tinkering, the strategizing, I excel at it, yes, but it's not why I wanted to do this. My family taught me the value of empathy regardless of what divides us.

With Wolfguard, I am not alone. Each of them is also dedicated to making the world a better place, and I'm happy to be a part of that. We're already on the field and rescuing people. I'm on missions with the elite, because I'm also one of the elite.

With the architectural blueprints acquired, we move on Nighthaven. I can't imagine why they would do what the others say, but I wasn't here to see what kind of people they are. I trust that we know what we're doing. I have to help minimize the damage.

The expansion features its own Battle Pass. It will be released on June 14th, 2022 and will be available until September 5th, 2022. It is composed of 100 tiers across a Free and Premium track. Each tier rewards players with exclusive customization items, Alpha Packs, Bravo Packs, currency packs, and boosters for a total of 135 rewards.