"Everyone's running from something. But the darkness within can't be vanquished by distance. It can only be tempered by finding something to run towards and the promising light of new horizons."
— Harry Pandey

Operation Void Edge is the sixteenth expansion of Tom Clancy's Rainbow Six Siege. Unlike past expansions, it focused more on story-related content through the Battle Pass.

Around The World Battle Pass[]

When I was young, I collected rocks. I would spend hours on end, scouring empty lots and abandoned fields for just the right ones. I would examine them, turning them slowly over and over in my small hands. Some needed polishing, made smooth, and some were best left alone. Each was unique, with their own stories to tell. But I no longer collect rocks. Now I recruit people.

Like Thatcher, always threatening to retire, always there when you need him. Or Doc, already polished and smooth, ready to save the world. Ash, rough and tough as they come. Dokkaebi, a pearl in need of gentle care, waiting to shine. Buck, a lone wolf learning how to join the pack. And Mira, my keystone, without whom I'd be lost. 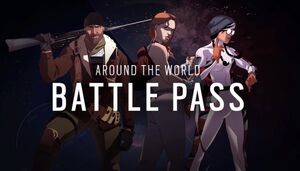 The expansion features its own Battle Pass known as "Around The World". It is composed of 35 tiers across a free and premium track. Each tier rewards players with exclusive customization items, Alpha Packs, currency packs, and boosters for a total of 50 rewards. Progression towards the Battle Pass can be earned in any playlist (excluding Training Grounds). It was released on March 25, 2020 and concluded on April 22, 2020.