Start a Wiki
watch 03:28
Tom Clancy's Rainbow Six Siege Trailer
Do you like this video?

"Are you ready, to Siege the day?"
— Rainbow Six Siege TV Spot

Inspired by counter-terrorist activities across the world, Siege puts heavy emphasis on environmental destruction and cooperation between players.

Unlike previous installments, the game features no singleplayer campaign and offers an online mode, though it does allow players to play offline in single-player tutorials called Situations.

It was released worldwide on December 1st, 2015.

Team Rainbow has been deactivated since 2012. In their absence, many new terrorist organizations emerged as a result. One such organization, the White Masks, came into prominence in 2015 by spreading chaos all across the world, sharing no discrimination with who they terrorize. With their ultimate objective unknown, they become a large enough threat that Team Rainbow was reactivated. Under the leadership of Aurelia Arnot, Operators were gathered from all across the world.

After successfully stopping a biochemical attack on Bartlett University, Six performed a eulogy for those who had lost their lives in the attack and many like it but also told of how Team Rainbow was back and that they would be ready to defend the world where needed. In 2018, Aurelia Arnot resigned from the position of Six and was succeeded by Harry Pandey.

Tom Clancy's Rainbow Six Siege offers dozens of different Operators to choose from, each hailing from multiple Counter-Terrorist Units from across the world. Only one Operator may be chosen from each specialty per round and cannot be changed until the round is over. Each Operator features a selection of different weapons, abilities, and equipment. Customization items, such as weapon skins and Operators themselves are obtained through earning and spending Renown.

Matches are conducted in a 5v5 manner, with each player only receiving one life per round. As such, it is extremely important to communicate with teammates and plan assaults when attacking or defense when defending. Attackers start each round with 45 seconds to send a Drone to survey and detect items in the environment, allowing players to find enemies and targets and mark them. Defenders, on the other hand, have the ability to fortify their location and prepare for the inevitable assault by the Attackers. This is done through setting up Reinforced Walls and Barricade around the area as well as deploying unique abilities to help defend the area such as with Bandit's Shock Wires or Mute's Signal Disruptors.

The game features the "three main pillars" - teamwork, tactics, and tension. Each map features multiple locations for both the Attackers and Defenders to choose from, greatly increasing the importance in conducting surveillance. Each map is designed to be close-quartered oriented, and have an emphasis on verticality and destruction.

The destruction system allows players to break structures by planting explosives on them or to make bullet holes on walls by shooting it. The environments of the game feature a layered material system, in which environmental objects of different materials show different reactions to player's attack. Players may gain tactical advantages through environmental destruction, and that the system aims at encouraging players to utilize creativity and strategy. In order to create a realistic gameplay, a bullet penetration system is featured, in which bullets deal less damage when they hit enemies through structures. This creates an ever-changing environment on the map, making it vital for players to be aware of their surroundings and work together. 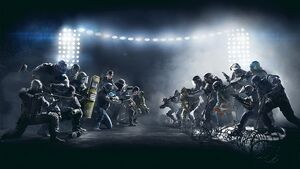 The game features a character-based system for multiplayer matches in the form of Operators. There are currently fifty-two available Operators, each hailing from various international Counter Terrorism Units (CTUs). There are two types of Operators: Attackers and Defenders. As their name implies, Attacking and Defending Operators feature unique skills and gadgets that are specialized for their respective role. This also applies to how much health or running speed an Operator may have.

Players may only choose one Operator per round. Additionally, once an Operator is chosen, it will be locked out from being chosen by other players. Aside from the default Recruit Operator which has no special ability of its own, all Operators must be purchased with Renown or R6 Credits. The price of DLC Operators every twelve months, with older Operators costing significantly less than newer Operators. [1]

GSG 9
Add a photo to this gallery

Each Operator has access to two primary weapons, a secondary weapon, and two gadgets. There are currently seventy-seven weapons and thirty-six gadgets. Each weapon is unique to specific Operators. Weapon performance may be customized through the use of weapon attachments. Each weapon has up to four available attachment slots. Weapons may also be personalized by equipping Charms and Weapon Skins.

The game features three main gamemodes - Situations, Multiplayer, and Terrorist Hunt. The Situations gamemode features ten tutorial missions that allow players to practice gameplay concepts offline against bots and gain a better familiarity with the game. The PVE gamemode Terrorist Hunt returns from past installments of the series, sharing many gamemodes with Multiplayer. It also features the "Classic" gamemode which tasks players with eliminating a set number of terrorists based on difficulty who have fortified themselves on a map.

Multiplayer features three sub-gamemodes: Bomb, Hostage, and Secure Area. Each multiplayer gamemmode is 5v5, with players having four minutes in a round to complete the respective objective. Matches are won once at least three rounds have been won.

Ranked is the competitive multiplayer playlist featured in Rainbow Six Siege and is available for players once they have reached level 30. While similar to casual multiplayer, Ranked features small gameplay changes for competitive play. For instance, players have the option to choose their spawn rather than it being random and become ranked based on their performance against the enemy team. Players must win at least two more rounds than the opposing team in order to secure a victory, meaning a team needs to win at least four rounds, allowing a maximum total of nine rounds able to be played.

The game originally featured a total of ten maps at launch, with an additional twelve maps added over the course of Year One, Two, Three, and Four. New maps are based around the theme of their respective expansion and are released for no additional cost.[2]

The Operation Dust Line expansion introduced cosmetic customization to the game. Cosmetics offer no gameplay advantage and may be purchased through Renown or R6 Credits in the in-game store. Special cosmetics may also be obtained from seasonal promotions or special events. Cosmetics are available in five rarities: Common, Uncommon, Rare, Epic, and Legendary. Cosmetics not currently available in the in-game store may only be obtained through Alpha Packs which are awarded for winning multiplayer matches.

"We made a commitment to treating our game as a service and investing in it for the long term. Our vision was not a game that you'd play through and 'beat', but something you'd regularly come back to. In order to do that, we'll be actively supporting Rainbow Six Siege with gameplay balancing and tweaks (plus detailed patch notes), events and competitions, and four major content releases with no paywall on gameplay content."
— Ubisoft

Tom Clancy's Rainbow Six Siege currently features fifteen expansion packs. Expansions are released every three months at no extra cost to players in the form of seasons. Expansions include additional content and major gameplay updates such as new Operators, maps, limited-time gamemodes, or cosmetic items. The release of expansions also mark the start of new seasons in Ranked.

Year Four Roadmap
Add a photo to this gallery

Limited Time Events are short-term events that are accompanied by an exclusive themed gamemode and exclusive themed cosmetics. The can then be obtained through gameplay or special Alpha Packs.

The development of Siege began in January 2013. Siege was announced as a successor to the canceled Tom Clancy's Rainbow 6: Patriots. Although focusing heavily on team play and realism, similar to previous titles in the Rainbow Six franchise, Siege introduced a new heavy multiplayer focus and destructible environments. A trailer shown at E3 2014 demonstrated a hostage rescue scenario, and the game initially received positive reactions.

On March 12, 2015, Ubisoft announced that a closed alpha was in development, scheduled to be released exclusively for Microsoft Windows. A closed beta of the game was also announced for Microsoft Windows, PlayStation 4 and Xbox One. Ubisoft revealed that guaranteed access to the beta would be available for those who pre-ordered the game on any of the platforms. Players could also gain access to the beta by donating money to a charity organization called Extra Life. The beta of the game began on September 24, 2015. On March 31, 2015, a Collector's Edition of the game, titled Art of Siege Edition was announced.

On June 15, 2015, during the Ubisoft press conference at E3, Ubisoft released multiple new trailers for the game. The trailers, which were also uploaded to the Ubisoft YouTube channel, showed some of the environments and gameplay elements found in Rainbow Six Siege. Ubisoft also announced that Terrorist Hunt, a co-operative multiplayer mode introduced in the previous Rainbow Six games, would return in Siege. It was also announced that players who purchased Siege for the Xbox One could download Tom Clancy's Rainbow Six: Vegas and its sequel, Tom Clancy's Rainbow Six: Vegas 2 for free.

On August 18, 2015, Ubisoft announced the game would be delayed to December 1, 2015, to increase the time spent on developing the game. A season pass was announced on November 12, 2015. Players who bought this version of the game could gain early access to operators offered in DLC and receive several weapon skins.

The game featured 11 maps at launch, with more added to the game as free downloadable content. According to Ubisoft, the decision was made as they wanted to extend the game's longevity. The game supports microtransactions for players who want to speed up their progress. However, items bought by players using real-life currency are designed to not affect or change the gameplay.

It was announced at the Rainbow Six Invitational in February of 2018 that there are currently no plans for a direct sequel for the game and that they plan to support the game for the next ten years.

Retrieved from "https://rainbowsix.fandom.com/wiki/Tom_Clancy%27s_Rainbow_Six_Siege?oldid=64417"
Community content is available under CC-BY-SA unless otherwise noted.