Edit
watch 02:56
Raise a Floppa - The Loop
Do you like this video?
Play Sound
This article features a Codex entry.

"Capable of producing a relentless barrage of projectiles, this Archæan shapeshifts quickly in and out of Sprawl to assault its target. Track it carefully."
— Site description

Tormentors are Tier 3 Archæans that appear in Tom Clancy's Rainbow Six Extraction. They can shape-shift into Sprawl to move quickly and are able to shoot projectiles.

Tormentors are tall humanoid Archæans with the ability to transform into a fluid Sprawl form. This allows them to move quickly and surprise threats by appearing behind them. This non-Newtonian fluidity also gives them the added benefit of avoiding ballastic damage. A Tormentor's main offensive capability is launching projectiles with a limited homing capability. These glowing projectiles are a form of high-energy Sprawl. It can shoot several small projectiles in quick successiom as well as a large, slow moving projectile. Direct hits from both can cause severe injuries if contact is made. Observations have shown that a Tormentor's weak point is located in their head.

Tormentors appear in subzones on higher difficulties. When not alert, they will patrol areas in their bipedal form. Once alerted, Tormentors will melt into a thick puddle of Sprawl and attempt to corner players. Tormentors will momentarily lose any pings or scanning outlines while moving in Sprawl form. They cannot move through walls in Sprawl form but can go through large holes in the base of walls.

When back in its bipedal form, Tormentor will fire highly damaging homing projectiles at players. Its small projectiles can deal large amounts of damage quickly but caution should especially be taken when it fires its large projectile. This projectile is a large and slow moving orb that can instantly down a player if hit. Its slow speed does give players an opportunity to destroy the projectile with gun fire, provided there is enough distance between players and the Tormentor. A Field Wall is very useful in stopping Tormentor projectiles. Should a player get too close to it, a Tormentor will swing its arms to deal moderate damage with each hit.

Like several other Archæans, the Tormentors weak point is its head. It will quickly switch to its Sprawl form if it takes damage. As soon as it reveals itself, a Glue Grenade, Paralysis Grenade, or Stun Grenade can be used to keep a Tormentor in place long enough to deal damage to its head or perform a Takedown. Explosives are also effective when engaging Tormentors. 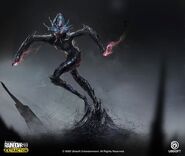