The Tournament of Champions, also known as the Six Invitational, is the culmination of everything each Operator has learned within The Program and acts as their ultimate test. Harry launched the first annual Tournament of Champions in early 2020 at the Stadium. Under the guise of a public training exercise for CTUs across the globe, the event allowed the public to enter The Stadium and observe each match.

The two teams that qualified for the Finals were made up of the following Operators: 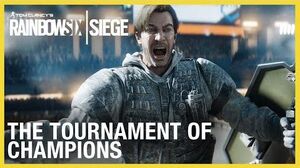 Sledge, Dokkaebi, and Blitz entered the kill house from the ground while Hibana and Thatcher breached from the second story windows. Sledge, Dokkaebi, and Blitz immediately engaged Doc and Mozzie in a firefight. Sledge was able to land a shot and down Mozzie, forcing Doc to drag him away to administer first aid. As Mozzie was revived, however, Hibana and Thatcher flanked and eliminated them. Outside, Sledge and Dokkaebi were engaged with Mira who was dealing suppressive fire. With time running out, Sledge ordered Dokkaebi to head to the bomb site while he dealt with Mira. Sledge then surprised Mira with a grenade, eliminating her.

Downstairs, Caveira was overwhelming Thatcher in hand-to-hand combat when Dokkaebi arrived and eliminated her with a shot to the head. In the stairwell, Dokkaebi and Blitz were eliminated by Pulse after the detonation of a nitro cell. He was then able to dispatch Thatcher who was distracted from his communications with Hibana.

Upon reaching the bomb site, Hibana was able to plant the diffuser but immediately found Pulse behind her. Before Pulse could eliminate her, Sledge emerged from a nearby wall and started firing. The two then engaged in hand-to-hand combat after Pulse ran out of ammunition for his shotgun. Pulse was able to counter Sledge and eliminated him with his sidearm. Despite this, Hibana stunned Pulse with a punch to the throat and "executed" him from behind, winning the match for the Attackers.

Mira surprised by a grenade "Mierda!"

Afterwards, Harry interviewed both teams to hear their thoughts about the match and what they could've done better. He also explained that the interviews would be recorded for internal-use only. Each Defender expressed their regret in the loss. Doc told of the importance of teamwork, Sledge and Thatcher discussed what thirty seconds mean, Mira regrets she was eliminated by a grenade, Caveira was particularly upset about losing but told Harry that there was "next year" and that she would be there.

Caveira hopeful for next year.

The two teams that qualified for the Finals were made up of the following Operators: 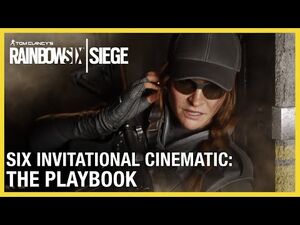 Team Ash faced off against Team Mira once again for the final match of the Six Invitational. During the match, Ash breached and entered the Stadium killhouse together with Dokkaebi who activated her Logic Bomb. This revealed Pulse's location above them, prompting Ash to use her launcher to cause him to fall through the floor. With Pulse down, Ash gave Thermite the go-ahead to plant his exothermic charge though he was soon intercepted and eliminated by Aruni. Not long after, Ash and Dokkaebi were pinned down from fire by the remaining Defenders. Ash radioed for Kali to provide cover fire, only for Kali to remove her earpiece and engage the other Defenders from outside the building. The confusion granted Cohen an opportunity to dispatch a Mozzie. A few seconds later, however, Ash was surprised by Kali who appeared from a window in front of her and held her at gun point. Kali then fired next to Cohen, eliminating Mira who had crept behind Ash. Unfortunately, the close-range shot grazed Ash's ear, causing her to fall to the ground in shock.

After her team had been crowned the champions of the tournament, Ash proceeded to bandage her wound and contemplate what had happened. Enraged at Kali's actions, Ash confronted her in the locker room in front of other operatives. Pushing Kali back, Ash angrily told her that it was not okay to have used her own teammates as bait. Kali stated that it did not matter as it was only a game and that she had just won it for them. Furious, Ash punched Kali square in the face. Bleeding, Kali attempted to retaliate but both women were pulled apart and held back by their fellow operatives.