Edit
watch 01:28
'Rainbow Six' Profile: Twitch
Do you like this video?
Play Sound

"If you have a few spare hours, I'd love to share the details of how this device is a masterpiece of design. Quadruple independent gear boxes enabling zero to twenty in under four seconds, ten kilometers of internal wiring, eleven hundred expertly machined hand-assembled components, flawless control at over 300 meters... But all my team needs to know is, 'Does it do the job, or doesn't it?' And let me tell you right now - it does the job."
— Twitch

Pichon grew up in a family of academics in the historic city of Nancy, France, where the children were encouraged to excel in Math, Science, and Technology. Early participation in sponsored computer programming competitions led to her joining the army cadets at sixteen. Almost immediately her talent was recognized, particularly in robotics. Her superiors quickly encouraged Pichon to study engineering while continuing her career in the military with the GIGN. From the start, Pichon's focus has been on adaptable technology that aids soldiers in the field. While there is much praise for her technological achievements, Pichon's tactical prowess and ability to problem solve quickly and efficiently make her a crucial operational asset.[2]

In 2015, Pichon was led by Olivier "Lion" Flament on a mission to Nigeria to assist medical personnel fighting the Ebola epidemic. Tragedy ensued, and the decisions Flament made for safety reasons put him at odds with Pichon and Gustave "Doc" Kateb, who blamed him for the death of several medical personnel on-site including Kateb's colleague. Later that year, Pichon's unique combination of talents made her well-suited to join Rainbow.

In 2016, Pichon met Taina "Caveira" Pereira and had some kind of relationship with her, but to what extent remains currently unknown. While not deployed on missions, Pichon proved invaluable for Rainbow's R&D Department. She assisted in the improvement of the team's equipment and was noted to have helped Elena "Mira" Álvarez in the development of Morowa "Clash" Evans' CCE Shield in 2017. In early 2018, Pichon assisted Rainbow's new CBRN Threat Unit with a situation concerning a mysterious mist on the shores of Sussex. During the operation, Pichon provided Olivier Flament with a new aerial drone that allowed him to determine the source of the mist plume. In 2019, Pereira went AWOL in Bolivia in order to search for her brother. Pichon and Meghan "Valkyrie" Castellano subsequently collaborated with Ghost Recon to conduct Operation Archangel in order to recover Caveira which proved to be a success.

In June 2020, Pichon and Julien "Rook" Nizan were in Paris, France when two large fires emerged downtown. The GIGN deployed the pair and several other officers to keep order from the chaos caused by the fire. Having faced a similar situation during training under The Program, Pichon and Nizan suspected the fires had been started in order to distract from a major bank heist across the city. They tracked and confronted the robbers who started firing at them. Nizan was shot in the head but was saved by his helmet. Pichon and Nizan then pursued the robbers across Paris in a high-speed motorcycle chase and eventually caught them.

Technologically creative isn't a term I've heard before working with Rainbow. According to Specialist Emmanuelle "Twitch" Pichon's field reports, it's the most concise description for her. Of course, it doesn't encapsulate all of who she is. There's more depth and surprises to Pichon than anyone expects.

There is some academic rivalry between Pichon and her sister, a physicist, but nothing serious, she tells me. It's endemic of the perfection her family instilled in their children. Her father told her to strive to be incredible every day and that it will resonate out into the universe.

The Rainbow team speaks highly of her both operationally and in a social setting. Specialist Gustave "Doc" Kateb, in particular, appreciates her intuition and empathy, while others such as Specialist Olivier "Lion" Flament praise her technological know-how.

I wanted to know how Pichon interprets technological creativity. She said it's the way she sees things differently and yet remains aware that she's seeing things differently. So I suppose I would add "philosopher" to her myriad descriptors.

She's a very hands-on researcher. The manner in which she gets right up close to a robot, interacting with it the way someone would a child or pet, illustrates her innate compassion. Pichon is currently teaching AI empathy so that it can, in turn, teach it to humans. I'd love to delve into this further, and have plans to visit the lab.

Because Pichon's passion for technology as a way to improve quality of life drives her in research and in her military career, I wonder if she isn't at times being too idealistic. She's an excellent operator with many skills to offer besides the tech, and I want her to give more thought to where the human factor is crucial.

Her background and interest in AI means one of Pichon's favorite pastimes is people watching. Whether it's settling into a restaurant or taking a bus, she goes wherever there are crowds and studies behavior. Travel, too, excites her. The list of where she hasn't been is shorter than where she has.

A Medium Armored Operator, Twitch can deploy up to two Shock Drones. The Shock Drones are specialized that can shoot lasers at a target. These drones can take out enemy gadgets from afar and shock enemies.

The Shock Drone can scout locations and deliver an electric shock via probes that can incapacitate electrical devices and be used as a distraction toward hostiles. The chassis holds multiple shots.

Developed from Skell Technology, the first official deployment of the RSD Model 1 was during a hostage situation in Paris. A mentally unstable suspect barricaded himself in a convenience store along with several hostages. GIGN was deployed and sought to resolve the situation without violence. Pichon was on site and was able to maneuver the drone close enough to the suspect to deliver a slight shock, forcing the suspect to drop his weapon, where he was incapacitated by an undercover operative. The incident was resolved with zero fatalities.

Let me start by saying how much I appreciate that both Dr. Harry (Six) Pandey and Elena (Mira) Maria Alvarez, Director of Research and Development, have implemented this evaluation and review of all equipment. I've attached a detailed schematic of the current RSD Model 1 (Shock Drone) device. Being able to run the current Shock Drone through controlled tests provided me with much needed additional data. With Elena's permission, I've scheduled further lab time to try some rough prototype ideas. I'd like permission to add my name to the schedule for the evaluation of Specialist Max Goose's device known as "Pest". Because it's such a powerful counter I'm interested in participating in the tests.

[Comment_E. Alvarez: I've looked at the schematic with your new modification ideas, and I'm thinking you should get IQ's (Specialist Monika Weiss) feedback on them. Also, re: Mozzie. There are some issues with the Australian's availability. If you want to fly there to observe the tests, we can discuss.

Twitch armed with a 417 (Post-Blood Orchid)

Twitch armed with an F2 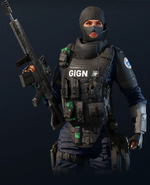 Twitch armed with an SG-CQB

Twitch in the Maquis Elite Set 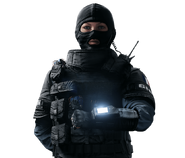 Twitch, Montagne and Rook in the Heaumes Bundle

Caveira and Twitch in the Luchadores Bundle

Twitch in the 8-Legged Bundle

Twitch as she appears in Tom Clancy's Ghost Recon Breakpoint 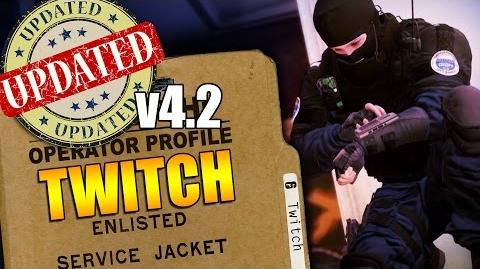