Ubisoft Quebec is a Canadian video game developer and subsidiary of Ubisoft Entertainment, located in Quebec City, Canada. Ubisoft formed the studio in June 2005 after which they became well known for their work on the Assassin's Creed Series.

Ubisoft Quebec was founded on June 27, 2005 and was led by Nicolas Rioux as general manager. In June 2008, Ubisoft Quebec announced that it had established a computer-generated imagery production arm that would work in conjunction with distributor Guillemot. The unit was closed down again with the foundation of Ubisoft Motion Pictures in May 2011. Longtail Studios's Quebec City development studio was acquired by Ubisoft in March 2010 and merged into Ubisoft Quebec: 48 employees were transferred to Ubisoft Quebec, while another 6–7, including the acquired studio's manager, departed.

In June 2013, François Pelland was appointed as Ubisoft Quebec's executive director of development. In September 2013, Ubisoft announced its intent to invest CA$373 million in Ubisoft Quebec over seven years to create up to 500 jobs. A first investment of CA$28 million in January 2014 opened 100 positions. Following onto another CA$4 million investment in July 2014, Ubisoft Quebec stated that it would move to new offices in the Saint-Roch neighborhood of Quebec City and open another 100 positions. When Rioux became "vice president of technology" for all of Ubisoft's Canadian studios in November 2017, Patrick Klaus was appointed Ubisoft Quebec's managing director, with Andrée Cossette as associate managing director. In December 2018, Mike Laidlaw joined the studio as creative director, having previously stepped down from the same position at BioWare. Cossette succeeded Klaus as managing director in November 2019, after Klaus had left the studio earlier that year.

This list denotes games in the Tom Clancy's Rainbow Six Franchise that have been developed by Ubisoft Quebec. 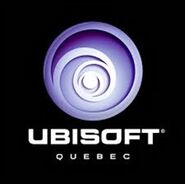 Old Logo
Add a photo to this gallery
Retrieved from "https://rainbowsix.fandom.com/wiki/Ubisoft_Quebec?oldid=79789"
Community content is available under CC-BY-SA unless otherwise noted.