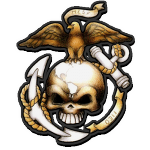 My name is Samuel Wilkicki, a Former Marine Corps Infantryman who served in Anbar Province Iraq in 2006. I am a huge Tom Clancy's fan. I've read almost all of his books and now playing his games. Joined the wiki to add new stuff, making it more informative and enjoyable to read.

The Sum of All Fears

Retrieved from "https://rainbowsix.fandom.com/wiki/User:GhostVikingUSMC?oldid=43720"
Community content is available under CC-BY-SA unless otherwise noted.