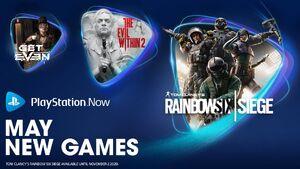 SONY has announced that Tom Clancy's Rainbow Six Siege is one of three free games now available for PlayStation Now members starting on May 5th. To top it off, theyve announced that it will be available to download and stream until November 2, 2020.

It’s the perfect time to try out the deeply tactical, always tense multiplayer shooter that has become an esports phenomenon in the years since its 2015 debut. Strained matches are built around two competing teams of players using a variety of weapons, gadgets and sound strategies to triumph over the other. While you’ll need to adapt to its uncompromising gameplay, it only makes every well-earned victory all the sweeter. Please note: this is the base edition.

In case you were wondering the other two games now available are The Evil Within 2 and Get Even. You can read more about the promotion on the Official PlayStation Blog.