"If you don't constantly feel like you're being watched, then you aren't paying attention."
— Valkyrie

Meghan J. "Valkyrie" Castellano is a Defending Operator featured in Tom Clancy's Rainbow Six Siege. She was introduced in the Operation Dust Line expansion alongside Blackbeard.[2]

Meghan Castellano was born and raised in the quintessential surf community of Oceanside, California. Her father was a respected Colonel in the United States Marine Corps who worked as a training officer. Her mother was a researcher at a nearby biotech company. From an early age, she was known as a high achiever in math and science and as an athletic prodigy. An Olympic hopeful in the 200-meter breaststroke, Castellano split her time between the pool and the army base. Her Olympic ambitions ended after she broke her arm in a car accident when she was sixteen.

She changed her focus after high school and enlisted in the United States Navy in the early 2000s. Castellano served four years before attending college on the Veterans Affairs bill. After graduating with a degree in Computer Science, specializing in Security and Cryptography, she transferred to the Navy's Information Dominance Corps. In 2007, Castellano collaborated with GROM Operator Elżbieta Bosak in Operation Orange Sky, acting as her source of intel.

Castellano's attention to detail and analytical skill made her one of the most sought-after specialists. She applied to become a SEAL when the position was opened to women and succeeded after several grueling years, acting as an encouragement for others to follow. During her training, she met Craig "Blackbeard" Jenson who served as an instructor for Hell Week. During a particularly dangerous mission in South America, Castellano met an undercover CIA operative named Karen Bowman. She provided Castellano's team with valuable intel, and the two later kept in contact with one another. In 2016, Castellano accepted an offer to join Rainbow alongside Blackbeard.[3]

In 2019, Castellano and Emmanuelle "Twitch" Pichon learned that Taina "Caveira" Pereira had gone AWOL to Bolivia. Castellano reached out to Karen Bowman who was also in Boliva leading Ghost Recon, and they launched Operation Archangel to locate Caveira. With Castellano and Bowman providing intel, Twitch and Anthony "Nomad" Perryman later found Caveira and helped her rescue her brother from the Santa Blanca Drug Cartel. Despite the mission's success, it caused tensions to rise between Castellano and Caveira.

In early 2022, Nighthaven cut ties with Rainbow and poached several operatives. With Rainbow no longer able to keep hostile organizations from hiring Nighthaven to oppose them, Harry "Six" Pandey sent Castellano on a reconnaissance mission to Singapore. There she retrieved schematics of Nighthaven's headquarters and performed surveillance of their facilities and activities. It was at this time that she discovered that they were involved in criminal activities. With the restructuring of Rainbow into smaller teams, Castellano was placed on Caveira's team, despite their prior grievances.

Castellano is singularly focused. She is driven and does not know how to give up on the goal easily. She will do whatever it takes to accomplish the mission in the most seamless and effective way possible.[4]

At the start of my first meeting with Specialist Meghan "Valkyrie" Castellano she struck me as someone who ticks all the boxes - someone who meets or exceeds expectations. Someone impeccable. But looking at the field reports I see someone aggressive, someone willing to do whatever it takes to accomplish the mission. This contrast interests me.

How Castellano views her role is more complicated than her initial polite response would indicate. While we've raised the bar and she appreciates the challenge, I can tell she's struggling with something.

Castellano isn't used to being around so many high-achievers. She's always been at the top of the class - the go-to person. The only other time that she felt "against the wall", as she put it, was during SEAL training. Normally I'd encourage her to interact with someone who can understand what she went through, another SEAL such as Specialist Craig "Blackbeard" Jenson, but I know he was one of the instructors during her Hell Week and while she respects him, I don't detect any great fondness there, either.

The intimidation she feels at being surrounded by other exceptional minds is resulting in undue pressure. Self-improvement is fine if it's for the right reasons. Castellano is already a valuable operator, despite mounting tensions with Specialist Taina "Caveira" Pereira over the incident in Bolivia. I want Castellano to invest in a healthier view of what it means to be a team.

Beyond her deployments, Castellano doesn't travel. Vacation is home near the sand and surf. This hermit lifestyle doesn't entirely seem like it's her natural state of being. The intense pressure she's putting on herself needs some sort of... fulcrum. She's no longer carrying the banner for female operators alone and needs to accept the support of her peers. I'm convinced understanding this will help her find equilibrium. It will take some convincing. But we have time.

The Gyro Cam Mk2 "Black Eye" is a quick deployment sticky camera that is encased in a tinted silicone ball, coated in micro-suction cups, the quick deploy camera maintains a clear view thanks to the internal gyroscope that dictates the angle of the lens. The suction cups allow the camera to adhere to any surface, while the gyroscope mounted lens stabilizes the camera angle and focus.

Once deployed, the live video feed can be viewed by all defending operators in the same manner as normal cameras. These cameras have a wider field of view, capable of rotating 360 degrees when placed on the ground, and can look around faster than normal cameras. The image is in color with a blue tint. As with normal cameras, they may also be destroyed by the enemy team.[2] 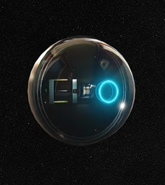 
I knew that Harry and Mira's plan of re-evaluating the entire loadout of the Rainbow team was going to be a huge task, but after arriving I saw just how massive an undertaking it was. I'm always happy to be in the thick of things!

This was good timing since the Gyro Cam Mk2's stabilization was due for a checkup anyway. Tests confirm that the camera is keeping the image on target at all times. I'd like to compare the evaluation of Specialist Adriano "Maestro" Martello's Evil Eye since I think it's using a different stabilizer design than mine. I understand that Specialist Emmanuelle "Twitch" Pichon worked on that and I'd like to compare notes with her.

Anyway, there may be other tweaks for my Gyro Cam at a later date. For now: Tests confirm that my Black Eye is *still* consistently the best quality, most adaptive and strategic real time intel-gathering device on the field. Too braggy? Too Bad!

Valkyrie armed with the MPX

Valkyrie armed with the SPAS-12 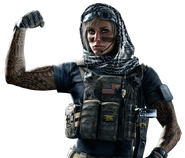 A screencap from the Dust Line Reveal Stream

Blackbeard and Valkyrie in the Operation Dust Line promotional art

Valkyrie struggling to keep up with Wamai (concept art)

Valkyrie in the Rock Star Bundle

Valkyrie in the Flamenco Bundle

Valkyrie in the Sunday Comics Bundle 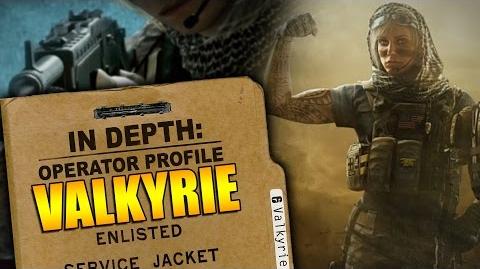