The WA2000 is a semi-automatic bullpup sniper rifle manufactured by Walther Arms SpA that was built to chamber three different rounds. These rounds are the 7.62x51mm NATO, .300 Winchester Magnum, and the 7.5x55mm Swiss round. The rifle saw very little production, because of how expensive it was and how it was not robust enough for military use. Only 176 WA2000's were ever built due to the high cost of the rifle making it currently rare and valuable.

The WA2000 is categorized as a sniper rifle in the Rainbow Six universe.

The WA2000 is a weapon featured in Tom Clancy's Rainbow Six: Rogue Spear.

The shortest sniper rifle used by the RAINBOW team, the WA-2000's bullpup design and light weight make it a favorite of snipers with needing to move stealthily into difficult positions. Its powerful .300 Winchester round has more punch than the more common 7.62mm NATO round. 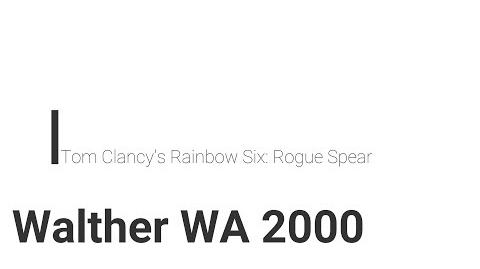 The WA2000 is a weapon featured in Tom Clancy's Rainbow Six 3: Raven Shield.

"Developed in the 1970's as a highly specialized police sniper rifle with a bullpup design that allows for accurate fire to over 1000 metres. The W2000 comes standard with a state of the art digital scope."
— In-game description

The W2000 is a weapon featured in Tom Clancy's Rainbow Six: Lockdown.