Collinn McKinley, codenamed Warden, is a Defending Operator featured in Tom Clancy's Rainbow Six Siege. He was introduced in the Operation Phantom Sight expansion alongside Nøkk.[1]

Collinn McKinley enrolled in the United States Marine Corps at 18 and earned several commendations in his service jacket for his aggressive quick-thinking, achieving Master Sergeant despite a few minor infractions on his record. After his third tour, he left the Marines and entered the Secret Service in close-protection detail. McKinley's agility was instrumental in saving United States Secretary of State Baldwin's life when insurgents attacked the U.S. diplomatic junket. Baldwin later went on to become President and requested McKinley be assigned to the Presidential Protective Division. McKinley has spent over a decade in Washington, protecting important political figures. He is the foremost expert in close protection detail, and with President Baldwin finishing his second term, McKinley has received high endorsements for his transition into Rainbow.[2]

I've learned to read between the lines, and when it comes to Specialist Collinn "Warden" McKinley, that's where the real story lies. His role as protector came easily to him between butting heads with his strict, hardworking father and defending his brothers at school, but it became more deeply ingrained during his three tours with the Marines.

McKinley's service with the Secret Service reads like a Washington gossip column/spy novel. During the attack on then Secretary-of-State Baldwin, the attackers used flashbangs, smoke grenades, and heavy suppressing fire to separate the protection detail. McKinley realized all their evacuation routes had been compromised and evacuated Baldwin alone. The incident clarified the reason behind McKinley's special glasses, but it's also become indicative of his modus operandi… his off-the-cuff attitude. He's never been wrong and I fear he'll rely on instinct until it finally fails him.

His access to the inner circle through the Office of the President made him the go-to in handling delicate situations. He's clever enough to lead people on the right track without implicating himself and I suspect he knows where a few bodies are buried. McKinley has amassed quite the war chest of political favors and a reputation as a lady's man. President Baldwin once told me that McKinley's dalliances eclipsed that of some Presidential administrations. The First Lady was displeased with that joke.

He knows how to manipulate; he deepens his Kentucky drawl when dealing with Republican senators, and plays the Southern gentleman around women. I was amused, watching him try to play to my personality… but I play the game too.

McKinley adores his teams and he works well with others, but his connection to the Oval Office has instilled him with a sense of invulnerability. McKinley has made many enemies among politicians, businessmen, and Lobbyists; he's a walking encyclopedia of their sins, and President Baldwin won't be around to protect him anymore.

He is the sort of non-traditional approach we need to keep the military and law enforcement more agile and surgical, someone who understands coordination on a large scale. Unfortunately, that means I owe President Baldwin a 25-year old single malt Scotch for recommending McKinley; he's insufferable when he's right.

A Medium Health Operator, Warden's unique gadget is a pair of Glance Smart Glasses, special glasses that nullify the effects of Stun Grenades, Smoke Grenades, and other related gadgets.

"Eyewear that improves visibility in smoke while standing still. Can also be activated to protect against or reduce flash blindness."
— In-game description

The Glance serves a function that was almost non-existent on the Defending team. With it active, Warden can see through smoke and turn around what could be a low-intel situation. Activating his Smart Glasses can also prevent Warden from being blinded by flash effects, or cleanse an existing flash blindness, salvaging an otherwise dangerous few seconds. However, the Glance's thermal vision only works as long as Warden stays immobile; otherwise, he is affected by smoke the same as everyone else. The Glance is a triggered effect, which must be restored through a cooldown after use.[1]


Specialist McKinley has been a nuisance. He keeps asking for different styles for his Smart Glasses, but I work on the lenses themselves. I don't do designer frames.

Specialist McKinley's experience during the coordinated attack against then Secretary of State Baldwin was the catalyst for the first generation of his Smart Glasses. It was ambitious, and he must have pulled a few strings to get his prototypes built, but they lacked refinement and their limited thermal capacity and polarized lenses still added more weight and thickness than necessary. Specialist Weiss and I opted for a different approach and we managed to construct digitally enhanced glasses. The principle is simple... the sensors scan the environment through smoke, digitally removing the occlusion while a virtual retinal display sends images to the back of the user's eyes. The scan lag and transmission requires him to stand still, however. When active, the VerRet display can also clear flash effects on overwhelmed photoreceptors through near infrared light to turboboost the mitochondria's production of ATP. Specialist Lera "Finka" Melnikova rightly suggested this would allow Specialist McKinely's eyes to recover more quickly from their effects.

Unfortunately, he must manually activate the glasses for them to work... a drawback of the battery drain on his Smart Glasses, but it's a first step.

Warden Aiming Down Sights with his glasses active 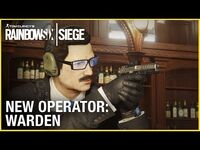 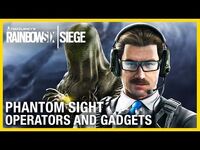