The White Masks are a terrorist organization featured in Tom Clancy's Rainbow Six Siege. They are the main enemy faction in Terrorist Hunt, easily identifiable by the white masks concealing their faces. While their motives are not explicitly clear, it is known that they are easily capable of carrying out attacks anywhere in the world and are known to be indiscriminate to their victims, disregarding age, religion, gender, or nationality. They have become a big enough threat that the Rainbow program has been reactivated as a result.

The Ambusher is the most common archetype of the White Masks. They are typically found hiding behind objects such as Deployable Shields, waiting to ambush the unsuspecting Attacking Operator. This is usually done in groups, so they can usually be eliminated in just a few shots. Unlike other enemy types, they will typically stay stationary until engaged. Even if engaged, they will not always pursue the Attacker, but they will use Stun Grenades to blind the enemy.

They are easily identifiable by their dark grey hoodies, bright white vest underneath it and their armored look. Ambushers have 125 health like 3 armor/health operators. They usually wield the M590A1 shotgun or the L85A2 assault rifle. They are only seen on the Defending side, never the Attack.

Roamers are another common archetype of the White Masks. While essentially the same as Ambushers, Roamers will actively leave the structure occupied by the White Masks and seek out Operators. They will only stop moving around the entire area upon gaining a visual on an Operator and will open fire or throw a Frag Grenade. They are also more likely to follow when he moves out of sight after engaging. When they are attacking Defending Operators, they are the most common enemies and are also equipped with Smoke Grenades and Frag Grenades.

Roamers are typically armed with Assault Rifles, such as the 552 Commando, AUG A2 or L85A2, but rarely carry the M590A1 shotgun. They wear light-grey hoodies, compared to the Ambusher's dark-grey and look lightly armored, also having 100 health, the lowest of the White Mask archetypes.

Breach Charges were removed from Roamers on the attacking side in the North Star update.

The Engineer archetype has two different functions, depending on whether or not they are Defending or Attacking.

When it comes to Defending, their sole duty is to set up defenses such as Barricades and wall Reinforcements. In situations only, they tend to cover entire rooms with Barbed Wire and Nitro Cells in order to slow down or incapacitate Attacking operators, allowing other, offense-orientated archetypes to flank and eliminate any opposition. Reinforcing walls is much less common but is still used as more of a trapping tactic rather than for protection.

When it comes to Attacking, they generally only appear in reinforced rooms (and several will appear on Defuse Bomb to reinforce the other bomb room once one of them is defused). However, on attack, they will appear with a custom Ballistic Shields with a M45 MEUSOC, as well as Frag Grenades and Exothermic Charges similar to Thermite's charges, that the Engineers use to breach reinforced walls and hatches.

They wield the L85A2, Aug A2, and 552 Commando rifles and wear a green hoodie with a visible white vest underneath, looking medium armored. Engineers have 110 health similar to 2 armor/health operators.

Nitro cells and Barbed wire were removed from defending Engineers in training grounds with the North Star update.

Bombers were removed in Operation Ember Rise in order for the mode to be more representative of the multiplayer.[1] They can still be found in the Situations No Intel, Cold Zero, Neutralize Cell, and Heavily Fortified

The Bomber is a less common but highly lethal archetype. The Bomber's only intention is to rush toward the Operator once their location has become known and commit a suicide bombing. The resulting explosion will easily destroy the surrounding area and inflict major damage on anyone in the vicinity. As a result, it is essential that they are eliminated first in order to easily dispatch other enemy types.

Bombers can be distinguished by their bulky white attire consisting of heavy body armor strapped with explosives and flashing red and blue lights. They can also be heard approaching by their signature breathing sound, which is very slow and heavy. Outrunning rushing Bombers is ill-advised as they will eventually catch up if they aren't dealt with soon. Their heavy-duty body armor makes them incredibly impervious to body shots, making headshots the only viable way to quickly dispatch them. Bombers can drop smoke grenades and stand in the smoke, concealing their position, and from a distance their distinctive red or blue light on their right shoulder.

Shooting at the light on a bomber's back will cause the Bomber to explode instantly. This is useful for quickly dispatching Bombers, though unrecommended due to the large amounts of damage the explosion will cause.

There typically were two Bombers per Terrorist Hunt game session on Normal difficulty (Classic, Disarm, and Extract), and only one during the last wave of Protect Asset.

White Masks can be heard speaking. They exchange intel on suspicious movements, send commands to each other, inform others of their action, and taunt downed Operators. In the final 4 single player situations, roamers will move towards the location of a bomber detonation. Headshots can prevent this. On all terrorist hunt missions and situations, enemies will try to shoot through walls and to flank Operators from behind. As terrorists are not detected when outside like in PvP, players need to take special attention to their back.

In a Disarm Bombs gamemode, the White Masks will try to stop the Bomb Defuser from deactivating their bombs. Even if one of them were to initiate disabling the defuser, they can still be stunned from Stun Grenades or Ying's Candelas, interrupting them. 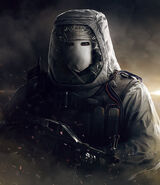