Edit
watch 04:03
Wiki Targeted (Games)
Do you like this video?
Play Sound
For the version of the character that appears in the novel, see Bill Henriksen.

William Hendrickson was born in Tulsa, Oklahoma in 1954. He earned a BA in Sociology at the University of Tulsa in 1977. From 1978-1982, he was employed at Sooner Security Systems. In 1982, Hendrickson married Linda Ann Garfield who was also from Tulsa. He joined the Dallas office of Global Security in 1983 and eventually became the Regional Director in 1989. During the period between 1988-1992, an escalating substance abuse problem nearly ended his career with Global. This would also result in the divorce from his wife in 1990.

Hendrickson spent six weeks in late 1992 on "medical leave" during which time he made the acquaintance of a young woman named Teri Quate who was an employee of the Horizon Corporation. The meeting between the pair was engineered as part of a general plan by the Phoenix Group to co-opt members of the international security community. Quate and Hendrickson starting sharing a house in London in 1998. In 2000, Hendrickson personally oversaw the planning for Global Security to provide security services to the Sydney Summer Games. Working with John Brightling, Hendrickson helped the Phoenix Group plant dispersal devices throughout the stadium in order to disperse the Ebola Brahma virus.

Following Rainbow's raid on the Horizon Corporation's headquarters, evidence was found linking Hendrickson to Brightling's terrorism plot. On September 30, 2000, Hendrickson attempted to flee the country before the virus dispersal and set up a Global Security motorcade to escort him to the airport. Rainbow was able to intercept the motorcade and captured Hendrickson for interrogation. Hendrickson later revealed the locations of the dispersal devices throughout the athlete's village and stadium which aided in their successful defusal. 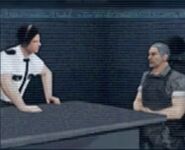