The XM8 is a derivative of the G36 rifle that was originally based off of the OICW (Objective Individual Combat Weapon) program. The XM8 is an assault rifle manufactured by Heckler and Koch that chambers the 5.56x45mm NATO round. The weapon never progressed out of its prototype stage in US trials, hence its "X" designation, but has since been adopted in service and further developed with a longer accessory rail with the Royal Malaysian Navy. The weapon was usually equipped with an integral red dot scope.

There is another variant of the XM8 that appeared in the Rainbow Six universe. This variant is the XM8 Compact Carbine.

The XM8 and XM8 Compact Carbine are categorized as assault rifles in the Rainbow Six universe.

"Developed for the US Army as a replacement for their current assault rifle, this weapon has no stock and a shortened barrel. Normally the M8 Compact uses the Scope, Red Dot, High Capacity Magazine or Suppressor attachments."
— In-game description

The M8 Compact is a weapon featured in Tom Clancy's Rainbow Six: Lockdown.

The M8 is a weapon featured in Tom Clancy's Rainbow Six: Vegas. In multiplayer, it considered to be on par of the FAMAS, due to its excellent damage profile and fast rate of fire.

The M8 is a weapon featured in Tom Clancy's Rainbow Six: Vegas 2. Since Vegas 1 and 2 share the same engine and models, the weapon appears in the same configuration as its Vegas 1 counterpart. 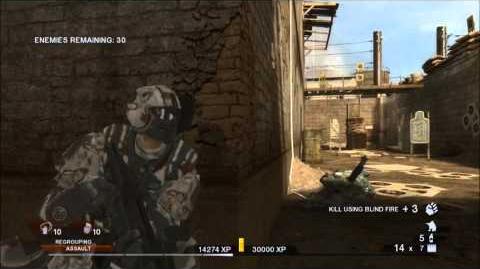