"You should know better than to write me off. Consider this a teaching moment."
— Sam Fisher

Samuel Leo "Sam" Fisher, codenamed Zero is an Attacking Operator featured in Tom Clancy's Rainbow Six Siege. He is the main protagonist and player character of the Tom Clancy's Splinter Cell Franchise and was introduced in the Operation Shadow Legacy expansion.

Though the CIA and Third Echelon have classified the majority of Fisher's childhood, it is known he was born in the Baltimore suburbs of Towson, Maryland, where he was raised by his paternal grandmother, Sarah. He was enrolled in a Military Boarding School where he learned to focus his energy, hone his skills, and to either follow orders or be sure to hide the evidence.

From school Fisher enrolled directly in the United States Naval Academy where he majored in Political Science and later went on to pursue SEAL Training. While serving in the Persian Gulf, Bolivia, Columbia, Senegal, and Kosovo, Fisher became known for his ability to complete the mission, regardless of personal cost. After being awarded a Defense Distinguished Service Medal, Fisher spent time as an instructor at Little Creek Naval Base, Virginia. He was recruited to the CIA, where he performed unknown operations, which were ultimately classified.

In 2020, Sam was on the run from an unknown enemy. As a cover, he accepted Harry Pandey's offer to join Rainbow, adopting the codename of "Zero". He became the first member of the Rainbow Operation Staff division as an instructor for The Program. Sam was brutal in his training sessions at the Stadium, regularly taking down entire teams singlehandedly. To counteract the arthritis from his growing age, Fisher would self-administer the nanobots Lera "Finka" Melnikova used to treat her neuropathy. Harry sets up the facilities as he requested and asks him to call him "Zero". By the time of the Tournament of Champions, he and Harry observed the finals match between Team Ash and Team Mira.

Although these are my first interactions and observations of Specialist Samuel Leo "Zero" Fisher, I feel that I'm finally getting a glimpse of the man behind the legend. He doesn't brag about what he's done or what he can do, but you can see his training in the way he moves and the critical assessment with which he evaluates his surroundings. If he were to read my evaluation, I'm sure he'd agree.

It's hard to pry details from the former Echelon agent. He is focused, to the point, and makes it clear when he's done with a subject. His mandate was never to seek out conflict, but to perform damage control before there was any evidence of a disaster. Fisher's skills and temperament ensure that he keeps a clear head under pressure and is always prepared, regardless of circumstance. I'm interested to see if he has a levelling influence on some of our more hotheaded specialists such as Evans or Brunsmeier.

Though his sarcasm can seem abrasive to those who aren't familiar with him — and maybe even to those who are — it hides a deep thoughtfulness and attention to detail. He can see right into the heart of an issue, or person. I look forward to his assessment and his suggestions for the improvements we can make to our training program. [...]

He doesn't want to talk about his daughter, but I feel that's more of a warning than an indication of any residual conflict between them. [REDACTED]

Fisher is very much a solo operator, though he possesses a sense of duty to his colleagues and teammates and shows his affection through action. I'm hoping to draw him out of his shell and show him the benefits of working with the R6 Program. Based on his background as an instructor I feel he'll appreciate more than the resources we can offer him, but also gain some satisfaction in the influence he'll have on the R6 Program, and his teammates. (Comment_S. Fisher: Is one of the benefits coffee, because I'm running low.)

You would think it was hard for me to evaluate someone held in such high esteem. The figure of Sam Fisher has always been wrapped in mystery. Looking at his impressive resume, or what’s been made available to us, it’s not difficult to see why you chose Specialist Sam “Zero” Fisher.

I can’t say much about his past missions as most of what I know is secondhand, and most of those details are unclear. I do know that he never left a man behind, and if he wasn’t brought in to prevent disaster, he was sure to clean it up. There’s no doubt, based on his experience as an instructor in Virginia, that he is more than capable in the capacity of teacher.

He seems to have kept in good shape despite being off active duty, though he also seemed a little more frazzled than usual when he arrived. I wonder what has Zero using Rainbow as his home base, he wouldn’t be here without his own motivations and we should take advantage of his experience. His military expertise will be a good balance to your psychological insight. As he’s coming in as the first member of the Rainbow Operational Staff (ROS), I’m curious and cautious of the changes he’ll bring to our organization. I’m sure his instruction will be a necessary, and painful, experience. I imagine there’s something he’s not telling me regarding his sudden appearance, but that’s not surprising. Zero operates on a need to know basis, I’m sure he’ll tell me when he thinks I need to know.

I am pleased I was able to examine the functionality of his surveillance equipment. It’s not often Zero allows others to play with his toys, and it was a learning experience. There is a flexibility of movement and behavior that can be used on the offensive as well as preparation for the defensive that is well suited to his inclination to take advantage of any situation.

Don’t think he will go easy on me in training just because he knew my father. If Zero taught me anything when I encountered him as a child, it was how to see clearly and take the measure of those around you. It’s strange seeing him after all these years — in some ways he has not changed at all, but in others? He’s aged well at least.

A Medium Health Operator, Zero's gadget is the ARGUS Launcher, which launches small cameras. These cameras can burrow into any surface, including reinforced walls and hatches, and provide a camera view on both sides of the deployed surface.

Each ARGUS Camera can fire an unlimited amount of projectiles, which can be used to destroy Defender gadgets and defences, or injure defenders themselves.

"Launcher that deploys cameras which can pierce through breakable and reinforced surfaces to surveil either side and shoot a laser."
— In-game Description

"ARGUS, like Zero, has eyes everywhere. Sometimes where you least expect them... or want them."
— Mira

Intel is crucial to a good attack strategy, and Zero is well aware of that. His ARGUS Launcher is equipped with very special cameras that can lodge themselves into breakable and reinforced surface to surveil either side.

Yes, these cameras can cover two angles and effectively allow you to spy on the opposing team. ARGUS Cameras do have one more quirk though: a single laser shot, perfect for destroying key elements in the Defenders’ setup or drawing attention away from choke points.

I have to hand it to him — Specialist Samuel Leo "Zero" Fisher doesn't do things the usual way. He seems to always be on top of things, so l'm not surprised this extends to his equipment. I'd like to know how he always seems to know what's going on, and how his coffee mug is always full.

I'm really impressed with the adaptability of ARGUS. Why haven't we done this with all our cameras? The fact that it's made to pierce reinforced walls and transition between one side or the other is a mechanism I haven't used in other devices. Of course, if it doesn't make it all the way through, it can still function on one side for surveillance.

I think the addition of the laser is particularly inspired. If ARGUS breaks through the wall and you happen to see a moment of opportunity, why not take advantage? Either way, I'm excited to see this in Zero's hands. There's only so much we can do in the lab. The real test will be in the field. 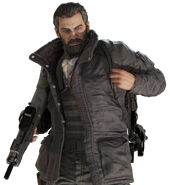