Start a Wiki
watch 01:26
Rainbow Six Lore: Zofia
Do you like this video?

Zofia Bosak was born on January 28, 1981 in Wrocław, Poland. She is the oldest daughter of Jan Bosak, former commander of the Polish Special Forces unit GROM. She is also the older sister of Elżbieta Bosak. Growing up, her father favored Zofia, causing a rift between them. Despite this, Zofia was highly protective of her sister.

When Zofia hit legal age, she enlisted in the army. Among Zofia's most notable exploits is a rescue Operation in Guatemala, codenamed Red Agatha. A disastrous tropical storm formed a sinkhole in the middle of the city, swallowing an entire neighbourhood. Zofia was deployed to protect a team of engineers examining the perimeter. During a sudden landfall, she hitched a child over her back and ran as the ground disappeared from under her feet. The kid clung to her back and she gripped the edge with her bare hands for the next half hour as she hung over the abyss. To reward her special ability to withstand hardships, Zofia received a medal and was promoted to Second Lieutenant.

Challenged by her squad mates on the field, she discovered the true kind of specialist she wanted to become. At the peak of her career, she flew back to Poland for her wedding ceremony. While she intended the event to be private, her father turned it into a marked celebration, reuniting the clique of politicians who took power after the assassination of Poland’s President. Zofia was shocked to see two former suspects among the crowd, embraced warmly by her father. She left the party early, feigning illness. While investigating what she’d seen, Zofia discovered she was pregnant. Taking an exceptionally early maternity leave. At the family home, Zofia kept her pregnancy hidden from her father. He committed suicide in the months that followed, though the circumstances surrounding his death were suspicious.

The birth of her daughter had a profound effect on Zofia, igniting her need to cocoon with her family – but Ela ignored all her attempts to reconcile. Zofia returned to the GROM soon after hearing Ela would pass the selection. Except for her attempts to reconnect with her sister, Zofia kept her distance with everyone else. Her squadron noticed this change and wondered if her recent obsession with her father's pocket watch was a remnant of grief, or something more.

When Ela accepted the prestigious offer to join Team Rainbow, Zofia saw no reason to stay behind. Everything about the GROM now seemed to remind her of her father. She used her contacts to reach Six personally, who agreed to meet her in Geneva. Three months later, Zofia became an official member of Team Rainbow.[4]

A Medium Armored Operator, Zofia has access to the KS79 LIFELINE, a double barrel launcher that can launch either impact grenades or concussion grenades.

KS79 LIFELINE makes use of electronically triggered projectile technology that can fire both concussion and impact ammunition. Since multiple grenades are superposed in the gun barrel, reloading magazines are no longer necessary, resulting in unmatched efficiency. The concussion ammunition delivers a 170-decibel shockwave that impairs hearing and causes a dizzying effect. The impact ammunition bulldozes walls in an instant, so brace yourselves for an explosive assault.[3]

Zofia armed with M762
Add a photo to this gallery 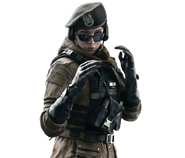 Zofia and her daughter 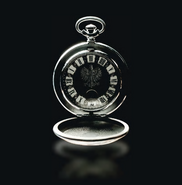 Zofia's Icon
Add a photo to this gallery 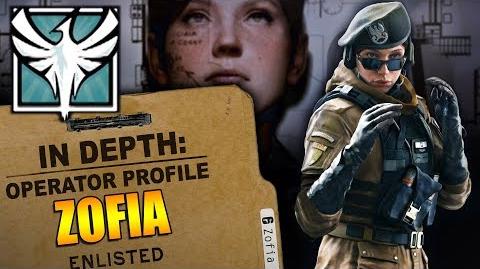 Retrieved from "https://rainbowsix.fandom.com/wiki/Zofia?oldid=63557"
Community content is available under CC-BY-SA unless otherwise noted.